In 1922 a blind WW1 veteran and former intelligence officer attends a weekend with his aristocratic wife and her family at a country house in the New Forest, Hampshire, England. Fourteen people sit down to dinner on the Friday night; by the end of the weekend there are two murders, an attempted murder and a suicide.

This is book one in a series of humorous murder mysteries and introduces young sleuths The Hon Melissa Charters and her war veteran husband Major Alastair Charters.

The pair collaborate using Melissa’s powers of observation and Alasdair’s old skills gained in the Secret Intelligence Service to investigate the events unfolding over the weekend. A murder mystery with a spy plot told from many different points of view in the tradition of Simon Brett, M C Beaton and Kerry Greenwood.

Will our investigators discover who is behind the murders?

The woods smelt peaty, and the falling leaves rustled under foot. Melissa had set quite a pace and he realised how unfit he was. He persevered for a short while longer but became so hot, bundled up in his coat, and so out of breath that he called a halt. Melissa led him over to a fallen tree and they sat on the horizontal trunk. Melissa seemed happy to let the silence of the forest surround them. But then it was not silent; Alasdair could hear the rustle as the light breeze lifted the leaves in the treetops and stirred the loose leaves at their feet. He reached out, took off his glove and rested his hand on the trunk. It was dry from age but damp from the cool autumn air. He picked at the bark; it released a smell that all at once threw him back into the war – pine needles. He and two others had been on the trail of a deserter. A deserter or a spy? Either way, he was headed towards the German lines and their job was to apprehend the chap before he got there. Alive, if possible, only for the information. Regardless, it would be a firing squad later. This was a part of his job he hated. The generals saw spies everywhere, probably to explain away their own incompetence; it couldn’t possibly be their fault, could it? So far, Alasdair had found no spies, only frightened, exhausted and witless men, driven mad by the guns, death and squalor. He suddenly hoped they did not find the deserter. Then a shot rang out. Alasdair had been kneeling behind a fallen tree, looking for boot prints. He turned. One of his team was down. Craig, a canny Scot who had enlisted early and had, until now, led a charmed life scratch-free. A clear shot through the head. This was a marksman. A German sniper, or had their man a rifle and wits after all?

Crouching, Alasdair searched the woods for the man with the gun. He was cautious about using his field glasses as there was still enough light that the glass might pick up and reflect, making him an easy target. He glanced over at his other team member, Adrian Masters, a young officer, a new recruit, raw and unpractised. He had been desperate to be included in this sortie. He wanted to be tested; well, now he was. He crouched behind a tree and was pulling out his field glasses. Alasdair called a warning and a bullet pinged into the fallen tree he was sheltering behind, releasing the smell of the sap. Strong, tart, head-clearing. With clarity, Alasdair realised that their assailant was up a tree. He waved at Adrian to keep down, but the young fool ignored him and decided to make a run for it over to where Alasdair was sheltering. Too late; the sniper was skilled well enough. He had the reach with the bullet finding the tree trunk. Another head shot and the poor young chump was dead.

Alasdair was furious. He wanted to leap up and charge down this killer of innocent young boys, but he didn’t. He lowered himself to the ground and lay there. The sniper might have him in his sights but he, in turn, now knew which tree he was hiding in. The guns had stopped and there was silence throughout the forest, just the rustling and scratchings. All Alasdair had to do was wait. At some point, the sniper would have to descend the tree, and he would be waiting. This was now a duel to the death.

Vicki worked as a Chartered Librarian for the Royal National Institute of Blind People and then for the past 19 years in public libraries in Bournemouth and Poole. There she enjoyed arranging and attending writing courses and author events, including such luminaries as Fay Weldon and Peter James. With the Reading Agency and other librarians round the country she reviewed and selected books for The Radio Two Book Club. All the time writing away in her spare time.

Born in California but brought up in England she was introduced to the Golden Age of crime authors at an early age by her mother. She is married to a blind physiotherapist, and it is from his mother, born in a large country house in Devon (now a hotel), educated by governess and with a cut glass voice like the Queen, that she absorbed real life stories about the twenties and thirties.

She has always had a fascination with the Art Deco period and the Golden Age of crime writing. She has been filling her house with Art Deco inspired artefacts and clothing for 40 years.

Blind Witness is her debut novel and is the beginning of the Charters Mysteries Series featuring Major Alasdair Charters and The Honourable Melissa Charters. 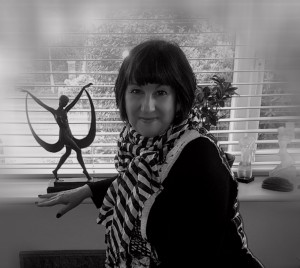