Family feuds just got bloodier… A gripping thriller, and a great story of death, revenge and vodka.
To save glamorous Kat White’s life, Ben Halloran killed his gangster father. Now his brother wants to even the score. 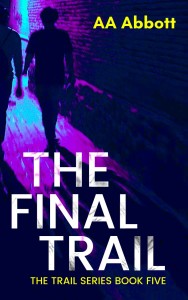 The Trail ends – with revenge and reconciliation

Glamorous Kat White should have her prospective father-in-law wrapped around her little finger. She’s pretty, hard-working and successful. Yet Marty Bridges doesn’t like or trust her. In his opinion, Kat and trouble always seem to find each other. He wishes his son, Tim, had fallen in love with someone else. “The Final Trail” begins with Marty’s finances in robust health, not least because he’s making megabucks from the premium vodka brand Kat has developed. Kat, however, wants a bigger slice of the profits. The conflict between Kat and Marty shows no sign of subsiding. Other family feuds simmer in “The Final Trail” too. Young Ben Halloran, who killed his gangster father to save Kat’s life, finds out the hard way that his brother wants his blood. Worse, Kat’s estranged mother betrays her family still further.

With the stage set for more arguments and bloodletting, why end the five-book Trail series now? Ultimately, it’s because Kat has grown up. Doing her utmost to make and market Starshine vodka, she’s a different person from the party girl drifting into a rich man’s arms in “The Bride’s Trail”. Her relationship with Tim Bridges is an equal partnership. Kat has learned that she can’t depend on anyone else for wealth and happiness: she has to build it herself. She deserves to reap the rewards of her hard work, in terms of material success and recognition from those around her.

Without giving too much away, Kat isn’t the only person whose outlook changes. Despite the grudges, disagreements and dirty dealings that punctuate the story, “The Final Trail” is as much about reconciliation as revenge. As ever, an army of beta readers and an editor (the lovely Katharine D’Souza) were responsible for shaping the book, and several chapters were chopped out. The outtakes will form the basis for a few short stories, focused especially on minor characters like Alana Green. She’s the hardnosed insurance boss who readers love to hate (in fact, I tried to kill her in an earlier book, and the beta readers insisted she must survive). Although this is the last full-length Trail book, do watch my website in 2020 for news of shorter tales.

English thriller writer AA Abbott’s real name is Helen Blenkinsop, but like JK Rowling, she wanted to . She loves city life, having lived and worked in London, Birmingham and Bristol. Her crime thrillers, set in Birmingham and London, sizzle with suspense, twists and the evils of office politics.

Helen’s books are available in a dyslexia-friendly large print as well as standard paperback and Kindle editions.