What if you discovered a hundred-year-old diary under your floorboards – and then found references in it to yourself? Or if you lived in 1901, yet kept seeing glimpses of a girl from modern times? And what if both of you had problems that only the other could really understand? Emily and Aysha live in the same Stepney house and an inexplicable link develops between them, fuelled by Aysha’s discovery of a journal and Emily’s sightings of a ‘future ghost’. Each takes courage from the other’s predicament – after all, what’s a hundred years between friends? 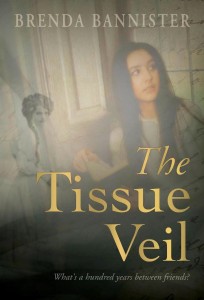 Someone asked me a question about my research for The Tissue Veil at a book talk and at first I struggled to remember everything I’d used. Then I looked at my internet ‘favourites’ and, in between pages with recipes for banana oat muffins and contact details for the man who services my central heating, I found links to a 1902 London underground map, music hall playbills, shipping news for the Boer War period, a paper on smoking and health in the nineteenth century and many other links. I referred to much of this as I went along, feeling reasonably comfortable with life in what would have been my grandparents’ childhood era. I remembered checking hair styles and fashions, the costs of a tube fare and of entrance to the public baths. I also had frequent recourse to the Times Online — courtesy of my library card, which allows me to access this resource at home — to check on events and even the weather on specific dates.

Did it matter whether it was windy, wet or foggy on any particular day? The Tissue Veil opens on the day of Queen Victoria’s funeral and anyone can watch British Pathé’s archive footage of the procession on YouTube The fact that it took place on a grey and bitterly cold day in February 1901 is well-known and has relevance to my plot, but as for other times — would readers care if the weather I described for a given date was accurate or not? It would be just my luck if someone out there checked up on me but, irrespective of that, knowing that I’d got it right was a source of satisfaction and gave me confidence in what I wrote.

Based in East London in both the early 20th and 21st centuries, the novel has a dual time frame, with two young women, Emily and Aysha, as central characters. I got used to cross-referencing the calendars for the relevant years, checking the dates for Easter in both eras and for Islamic festivals in the modern age. These two girls and their families live in the same house, one hundred years apart, but dwellings have been altered over the years — what was the kitchen and scullery has become the basement flat — and I needed to know that the one I had in mind would work for both the Edwardian household and the modern Bangladeshi one . Luckily property websites have similar houses listed — with handy photographs and room plans!

In many ways, the 21st century that was equally problematic: what films were released in 2001, what were the latest mobile phone models or the must-have children’s toys? And what away fixture would Karen’s football supporter dad have travelled to watch? — I knew someone

would definitely remember that! At one point, the students in my story watch the 9/11 attacks unfolding on television at college — as I had done in the college library where I worked at the time. The horror of that day came back as I watched the video footage over and over again in order to describe what they saw.

It’s amazing how the writing process can unlock our brains, unearthing memories we’ve forgotten we had, but for all the stuff we’ve never known, we’re lucky to have so many resources at hand.

Thank you, Brenda Bannister and RachelsRandomResources.

Brenda studied English at university and later qualified as a librarian, working in various educational settings from schools to higher education. Moving from London to Frome in Somerset in 2010 proved a catalyst for her own writing as she joined local fiction and script writing groups. She has had a number of short stories published, plus short plays produced in local pub theatre, but all the while was incubating a story based in the area of Tower Hamlets where she had worked for eighteen years. This germ of a story became ‘The Tissue Veil’.

Brenda is a founder member of Frome Writers’ Collective, an organisation which has grown from a handful of members to over a hundred in the past four years, and helped set up its innovative Silver Crow Book Brand. She is also the current organiser of the annual Frome Festival Short Story Competition. A lifelong reader, Brenda rarely follows genres, but enjoys modern literary fiction, historical fiction, classics and the occasional detective novel. The latest Bernard Cornwell might be a guilty pleasure, but she’ll be even more eager to get her hands on Hilary Mantel’s final instalment of Thomas Cromwell’s story.