Harrogate attracts hundreds of players to the annual Games Convention and for one player it is the perfect opportunity to kill by the mechanics of his own sinister game.

Each victim will die in the same way. Each will be classed as the loser and their time will have run out. The escape room and the game table will draw more, each believing they are invincible.

However, in every game there is always a traitor waiting in the wings.

The latest in the bestselling Harrogate Crime Series – discover your next favourite crime series now. 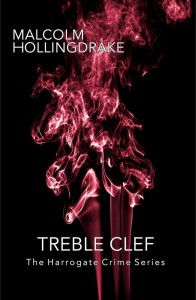 The Art of the Cover

One of the major changes I had to consider when I made the decision to publish as an independent author was to review the cover designs of the eight books. The original covers had served me well and had received many positive comments but they had been created over time. There were similarities within each; whether this be a familiar colour or font or style. However, there was inevitably something missing.

Deciding to start all over again is a luxury many authors never experience and although the thought of designing your own covers is exciting, it is also somewhat intimidating. You have one real chance to get it right and that, believe me, brings with it a degree of pressure.

I had two options – send them to a cover designer with an idea of theme and detailing the overall concept behind the series, or go it alone. The first option if you are working with only one or two books would be fine but when considering eight it proved far too expensive and so I was left with no other option.

I had been brought up in an artistic household. My father was a good artist and my uncle was a commercial artist and so I was no stranger to design, paint and paper. I had in fact taught Art throughout my teaching career. I had heard it so often, “I hate art as I can’t draw.” “It doesn’t look right!” It’s about how you teach and how you get young children to perceive what is right and wrong. Not all art is a photographic image and once children could see other styles and ideas, I felt that I was on the way to developing a more abstract and creative process, so much so I had painted in large script along the top of one wall in the art room – ‘Art can never be wrong’. It became our mantra and considering the children had severe behavioural difficulties, they soon thrived in an environment that was free from the traditional perceptions of what a piece of art should be.

So, why was I not following my own advice? I loved art, collected art, bought and sold art at auction. I even passed that love on to DCI Cyril Bennett, the protagonist within the series. I was anxious because this was so new, and in my opinion, critical to the success of the newly published work.

‘When in doubt, do the courageous thing.’

I decided to look at the series available on Amazon, the cover designs that were attached to best-selling authors. There was a similarity. I quickly realised that I did not want an image containing a solitary female wearing a brightly coloured coat. Strangely, I knew what I did not want but also not what I did want. I was attracted to the cover design of LJ Ross, Ann Cleeves, Denzil Meyrick, David Blake to name a few. They all had something in common; each book linked with the next, each easily identifiable in belonging to the specific author. It was this knowledge that gave me the insight to realise that as soon as I saw three images, posted on Twitter, that I had found what I was looking for.

Kevin Graham of photolincs.co.uk had posted three images of smoke set against a black background, each very individual, each conveying a different moment in time. Coloured differently, they would be perfect. Contacting the photographer, I received a number of images from which to select, all very different, all beautifully photographed. It was a pleasure to work with Kev. I had my core. Each would now be coloured and chosen to suit the specific title. It is here I needed the skills of Craig Benyon of Create Print, Wigan. Craig ensured that each book would be perfectly matched with correct font spacing and colour. Sitting with someone as they manipulate the design is so important, ensuring the covers were just what I had imagined them to be.

They say that you cannot judge a book by its cover. That is so true… but how often are we attracted by a cover image? We stop, take a closer look and maybe read the blurb, the first step to getting another reader.

The experience has been a pleasure and I am delighted with the end results. I use the smoke now on my posters and advertising material. It even sits nicely on a T-shirt.

Thank you, Malcolm Hollingdrake and Bits about Books.

You could say that the writing was clearly on the wall for someone born in a library that they might aspire to be an author, but to get to that point Malcolm Hollingdrake has travelled a circuitous route.

Malcolm worked in education for many years, even teaching for a period in Cairo before he started writing, a challenge he had longed to tackle for more years than he cares to remember.

He has written a number of successful short stories, has nine books now available and is presently writing the eighth crime novel set in Harrogate, North Yorkshire.

Born in Bradford and spending three years at Ripon College, Malcolm has never lost his love for his home county, a passion that is reflected in the settings for all the DCI Bennett novels.

Currently, Malcolm is writing a new series which is set in Merseyside.

Malcolm has enjoyed many hobbies including collecting works by Northern artists; the art auctions offer a degree of excitement when both buying and certainly when selling. It is a hobby he has bestowed upon DCI Cyril Bennett, the main character in his successful Bennett series.