The Awakening Aten envelops the reader in an Egypt of whispers and fears, of webs within webs, deceit upon deceit. Its themes of murder, intrigue, political and religious conflict, corruption, tomb robbing, war and executions are set against a background of fundamental ideological change.

Ancient Egypt is seen through the eyes of two families; one royal, the other commoner. Yuya, whose tomb is in the Valley of the Kings, is a foreigner who rises from slavery to become Regent to an infant Pharaoh and thus, the most powerful man in the world’s wealthiest empire. His children and descendants will remain at the very heart of the country’s destiny. Kha is a tomb painter and builder who experiences both the despair of imprisonment and the horror of war. As Overseer of the King’s Works he restores the Great Sphinx, and inscribes the ‘Dream Stela’ placed between its paws, still visible today. Through tragic and deathly events his family and that of Yuya become entwined. 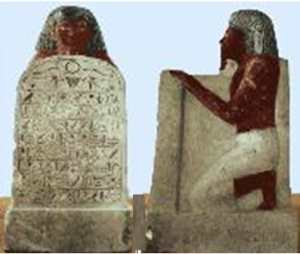 ‘The Awakening Aten’ is a novel based on the fictional lives of real people living in Egypt 3,500 years ago.

One of those people is Nahkt.

There is no information about Nahkt other than that contained in his tomb. His name means ‘strong.’ In his lifetime he held the titles of “scribe” and “serving priest”. The only other information we can glean is that his wife was named, Tawy, she was a ‘chantress of Amun’, and that her son was called Amenemapet.

Nahkt’s tomb was discovered (and probably robbed) by locals in around 1887. It was partially cleared by the Antiquities Service in 1889 after European archaeologists rediscovered it. However, due to lack of plans, the burial chamber and shaft were not cleared until around 1907 when Norman de Garis Davies and his wife Anna Macpherson Cummings, (for some unknown reason known as Nina,) were commissioned by the Metropolitan Museum of New York to take tracings and drawings of this and other tombs. Their journal entries, ‘The Tomb of Nakht at Thebes,’ were published in 1907.

Nahkt’s tomb in the Valley of the Nobles was the first non-royal tomb I ever entered. It was a quiet January, my wife and I were the only tourists in the valley, which made us very popular with the guides and tomb caretakers. We spent a long time in this particular tomb, lit for us by mirrors reflecting the sunlight. The tomb caretaker told us the story of Nahkt’s statue found as if discarded, in the shaft. He showed where the name of Amun had been chiselled out wherever it appeared throughout the tomb, but was unable to tell us why.

He pointed out the richness of the artwork, particularly of the three musicians which broke with the conventional way of painting at that time.

When I decided to put pen to paper, I just had to include Nahkt, and all of the above elements are included in ‘The Awakening Aten’ with my own interpretation of events.

At first, Nahkt was depicted as a quiet cleric living his life, working in the temple, married to Tawy and sharing everything with ‘her’ son Amenemopet, preparing for his post-mortem journey to eternal paradise. This characterisation didn’t last long as Tawy became more the focus of my attention. Nahkt became a villain, with Tawy and her family central to the plot.

In the ‘historical notes’ at the end of the novel, I apologise to the spirit of Nahkt for my cruel depiction of him. I re-emphasise that apology here – but someone had to be ‘Mr. Nasty!’

We can never know the true story of Nahkt, what we do know however, is that he had accumulated a lot of wealth in his lifetime to have been able to create an eternal resting place as sumptuously decorated as this is. ‘The Awakening Aten’ contains one possible, although, I admit, probably unlikely, explanation of his life and death, but there could be many more.

One of the joys of writing historical fiction based so long ago, is that there are no records of events which could potentially restrain the writer, from pursuing character traits and life events. The history of Egypt is one of guess work and piecing together puzzles. The history was by word of mouth, in the intricate tales of story tellers which undoubtedly changed over the course of thousands of years, before the Greeks and the Romans came to put their own interpretations, on what they found, down on paper. We can seek help from the carvings on temple walls and stone tablets known as ‘stele’ which have been found in sites all over Egypt. ‘The Awakening Aten’ takes part of the story from the ‘Dream Stela’ of Thutmose IV standing between the paws of the Great Sphinx in Giza. Additionally the great rose granite stela of Amenhotep II found in his sun temple near to the Sphinx and a copy in Karnak makes fascinating reading and a great basis of a storyline. These, of course, are the stories of the victors – like most history.

One of the main aims of a novelist is to create believable characters who the reader loves or hates. As one reviewer of ‘The Awakening Aten’ told me, it is good to have someone to ‘either root for and/or to hope they come to a sticky end – you didn’t disappoint there!’

When I was writing about the characters in the novel, I used as my inspiration the items which were buried with them. Sadly, the American led expedition to the tomb of Nahkt, decided to send items back to the United States aboard a steam ship, which was cruelly torpedoed and sunk by a German U-Boat somewhere off the coast of Ireland. This included the stelophorous kneeling statuette of Nahkt holding a stela with a hymn to Ra, the sun god, which now lies somewhere at the bottom of the Atlantic Ocean. Thanks to the exceptional artistic skills of Norman and Nina who made meticulous recordings we can know what some of them looked like – the picture above is a copy of the statuette as recorded by them.

In some parts of the world, there is a belief that a person is not dead so long as their name is mentioned. If that be true, then the Ancient Egyptians truly have attained that for which they strived so hard, – eternal life.

I am of Irish heritage and was the first member of my immediate family to be born outside of Ireland. My professional life has caused me to travel the world. I am now looking forward to settling in the North East of England, to concentrate on writing.

A graduate in Law from Leicester University, after working for some years in a commercial environment, I qualified as a Solicitor in 1981.

My career developed in an unusual way and I have lived and worked at various times in Italy, Brazil, the United States, India and Germany.

I have always had a love and fascination for history. A holiday in Egypt sparked a particular passion for Ancient Egypt, especially the latter part of the 18th Dynasty. A history, which Pharaoh Horemeb (Djeser-Kheperu-Ra circa 1319-1292 BCE) tried to destroy and which only came to light following the discovery of Tutankhamun’s tomb in 1922.

‘The Awakening Aten’ is the culmination of many years of research.

I have built up a substantial collection of academic books and novels on Ancient Egypt, its customs, traditions and daily life. I am fortunate to have been able to visit all of the major museums containing artefacts from Egypt throughout the world, as well as spending months in Egypt itself studying the funereal valleys and other sites. All of this supplemented by internet research.

This novel is the first in a plannned five book series, looking at the fictional lives of real people through a period of major political and religious change, spanning approximately 130 years.

My hobbies are reading, which I enjoy as much as I do writing, and taking bracing walks along the North East Coast and in the Northumberland Hills. 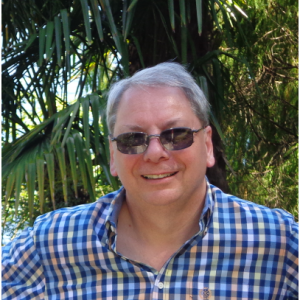