Ben longs to be prime minister one day. But with no political connections, he is about to crash out of a Masters degree with no future ahead. So when by chance he becomes fast friends with a young Arab prince, and is offered a job in his government, he jumps at the chance to get on the political ladder.

Amal dreads the throne. And with Ben’s help he wants to reform his country, steering it onto a path towards democracy. But with the king’s health failing, revolutionaries in the streets, and terrorism threatening everyone, the country is ready to tear itself apart.

Alone in a hostile land, Ben must help Amal weigh what is best against what is right, making decisions that will risk his country, his family, and his life.

Today no review but I am happy to publish a post written by the author. I hope you enjoy it as much as I did and don’t forget to check his book out!

Thank you, Tom Trott and RachelsRandomResources.

Over to you, Tom!

Inspiration can often come from the most unlikely of sources, and it can affect your work in a variety of ways. You need to pick it apart to understand what you’re taking from it, and what you need to leave. In this post I’m going to examine one source of inspiration for my political-thriller, The Benevolent Dictator, and talk about how it influenced it, and how it didn’t. We’re going to talk about The Great Gatsby, the book by F. Scott Fitzgerald.

We all think we know the story, but here’s a (very) brief overview:

“Through the narration of Nick Carraway, the reader is taken into the superficially glittering world of the mansions which lined the Long Island shore in the 1920s, to encounter Nick’s cousin Daisy, her brash but wealthy husband Tom Buchanan, Jay Gatsby and the mystery that surrounds him.”

I knew my book was going to bear no resemblance to it: the setting, the time, the world, the plot, were all different. But something about it was chiming with me. Something about the characters, but not their personalities or their fates (not completely anyway; I liked Nick’s naivety and Gatsby’s superficial elegance). It was a real devil to figure out what it was that I felt inspired by.

Then when I was setting down to write the book, and actually put digital ink to digital paper, it dawned on me what it was. It was the relationship. I wasn’t inspired by the characters themselves, but by the way they related to each other, and how that affected the structure of the novel.

The narrator of The Great Gatsby is Nick Carraway, but the titular character is (obviously) Jay Gatsby. This was similar to what I was planning to do in The Benevolent Dictator, where Ben would be the narrator and Amal the title character. Without realising it, I had replicated the narrative structure, or the viewpoint.

But if that is the case, I asked myself, who is the protagonist? Whose story was I telling? Am I writing Ben’s journey through his eyes, or is Ben chronicling Amal’s journey. Who goes through the greatest change? I thought they both went through significant change, could I have two protagonists? To figure this out I had to go back to the source of inspiration and study that. Who is the protagonist of The Great Gatsby?

And that’s when I realised that the relationship is the protagonist. It is the relationship that goes through the greatest change, that we follow from chapter to chapter. It was this idea that inspired me, and not the characters themselves.

This is a short and simple case study, but if I hadn’t been diligent enough to work through this I would have ended up taking the wrong things from The Great Gatsby and not ended up with the novella I wanted. So always take a breath, and spend time to think about why it is you’re inspired by something to make sure you get the most out of it.

Tom Trott was born in Brighton. He first started writing at Junior School, where he and a group of friends devised and performed comedy plays for school assemblies, much to the amusement of their fellow pupils. Since leaving school and growing up to be a big boy, he has written a short comedy play that was performed at the Theatre Royal Brighton in May 2014 as part of the Brighton Festival; he has written Daye’s Work, a television pilot for the local Brighton channel, and he has won the Empire Award (thriller category) in the 2015 New York Screenplay Contest. He is the proverbial Brighton rock, and currently lives in the city with his wife. 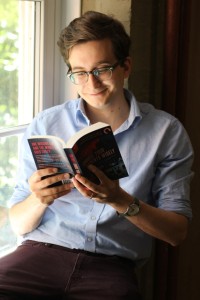