Since his rise to power, Russian President Alexander Volkov has increasingly engaged in hostile activities as he attempts to rebuild the Russian Empire. In support of his tactics, the Russian FSB have forged a Concordat dated to 1939 in which the Vatican supposedly agreed to cease all opposition to the Nazi government in return for being appointed the official state religion of the Third Reich.

Planting the counterfeit in a Berlin apartment, the FSB engineer a plan to blackmail the Vatican via the son of a murdered former East German Stasi colonel. The Vatican reluctantly agrees to acquire the counterfeit to prevent it falling into the hands of the Church’s enemies, sending the head of the Vatican Police, Lorenzo Rossi, to Germany to negotiate with the blackmailer. But Rossi’s flight is delayed and by the time he arrives the blackmailer is dead and the Concordat has vanished.

Rossi follows a deadly trail to Paris and onto Moscow, where he meets Cathy Doherty, a CIA Agent with a passion for all things Russian. Together they set out to establish the origins of the Concordat, and its intended purpose. Armed with information provided by a CIA informant, the forger is identified. Will Rossi be able to recover the Concordat and flee Russia with his life? 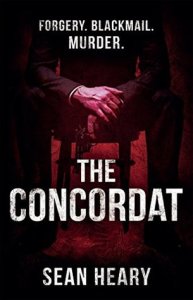 From Russia with love …

Normally politics and religion are not really my cup of tea, but when I read the blurb my interest was awakened. I have never been to Russia, but I adore the language.

First of all I have to say that the author obviously invested a lot of time and effort in researching. I learned from the book but it never felt as if I was reading a textbook.

The story was fast-paced and filled with action. Was it over the top? According to me, yes, absolutely, but I love that. Enzo seemed like the Italian James Bond with Cathy as his beautiful side kick. Together they can conquer everything, can’t they?

There was a lot of suspense as well, but the author also adds a splash of humour to the mix.
4,5 stars.

Sean Heary lived for many years only a stone’s throw from the Kremlin. No wonder he writes political thrillers. He also worked for several years in Tashkent, Uzbekistan where he met his wife. Born and raised in Australia, Sean now makes Germany his home. 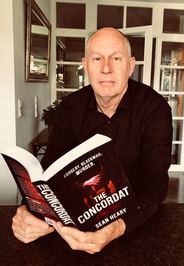