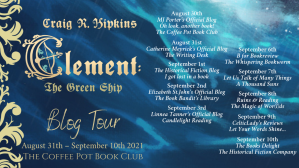 Normandy. The year 1161. King Henry ll sends the 14-year-old Clement, Count of la Haye on a secret mission. The young count and his friends travel in the wake of the mysterious mariner known as Sir Humphrey Rochford. Their destination? The legendary land of Vinland, known only from the Norse sagas. The journey is full of adventure and intrigue. Clement battles with a tyrannical Irish king and then finds his vessel attacked by a massive monster from the deep. The Green Ship sails to the sparse and barren land of Greenland where more trouble awaits. 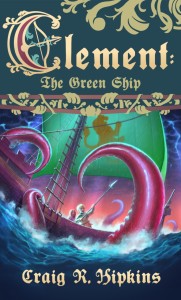 Clement could barely hear his own voice as the wind was whipping across the deck, but he began barking orders to the crew. One of Gorm’s sailors was at the tiller and soon had the Green Ship rolling along in the choppy sea in the direction of the land. Olaf hurried below deck and ordered the rowers to steer starboard. It was mid-afternoon and although the days were short because of their latitude, they hoped to narrow the distance to land before night set in.

“Tis the land of the Norseman,” Baldwin said, with Bran at his heels.

The dog began to bark and the reason was soon ascertained. A large fulmar with its grey wings and white protruding belly was gliding majestically over the ship. It seemed to be inquisitively observing the strange vessel. Soon, another one appeared in the sky and the closer the ship moved toward land the more prevalent they became. Finally, some of them were boldly landing on the mast.

“I’ve never seen a gull like that,” Dagena said with amazement.

“Neither have I. Perhaps they are giving us a welcome!” Clement said.

After a while, the wind shifted against them and Clement ordered the sail furled and a constant rotation of men at the oars. Jacques kept the men at the oars motivated by singing songs in his loud but harmonious voice and even took his turn pulling. After a few hours of constant, brutal work, the Green Ship found itself in a small bay. It was nearly dark and the shoreline looked bleak and foreboding, a windswept landscape, with rocky patches of dead grass mixed with snow. From the top of the sterncastle, Clement studied the terrain with his glass, but it was too dark to see much of anything. He handed it to Dagena and she quickly grabbed him by the shoulder.

She was pointing toward an outcrop of rocks piled together on the lonely beach. Taking back the glass he caught a glimpse of something white and hairy scurrying behind a boulder. Whatever it was, it appeared to be massive in size. He waited patiently; the glass still held to his eye.

“Sire, we took a sounding as you requested, we are at 20 fathoms,” Pierre yelled from the deck.

“Thanks Pierre, lower the anchors!”

He turned to Dagena who was still looking at the desolate spot on the beach where she had seen the mysterious looking creature.

“What do you think that thing was?”

He shrugged. “I don’t know Dagena, it looked like a bear, but not any kind that I have ever seen or heard of.”

“You’ve seen a bear before?”

“Yes, my father and I encountered one in the forest one morning. It was using its paws to catch fish in the river. It did not bother us, and we did not bother it, but merely kept our distance from it. I do not think that this thing is a bear Dagena.”

Clement ordered the oil lamps lit and it was soon dark. The Red Ship had anchored within hailing distance from them and the Brown Ship at the mouth of the bay. It was an eerily quiet night and so cold that the men not on watch huddled in their blankets below deck to keep warm. Alice was having a particularly rough time and spent most of the time in the sterncastle huddled around the small fire with Dagena, Clement, Olaf and Osment.

“We are getting low on wood for fuel,” Osment said, blowing into his hands. “And I did not see any trees, perhaps we might explore some of these inlets and fjords and see where they lead.”

“That is a good idea Osment,” Clement said. “We will take the skiff out in the morning and see what we can find.”

Dagena made a funny face. “Well, I should say, that I do not want to encounter that strange looking beast that we saw earlier.”

“Well, this is a strange and different land. There is no telling what we might encounter,” Clement replied. “But we will be armed and prepared for any trouble.”

Suddenly, there was a loud wailing sound coming from the direction of the shore. It was unlike anything that any of them had ever heard before. In the stillness of the night, it was even more startling. Alice nudged closer to Olaf and the five teens could almost hear their hearts beating in their chests. It was unnerving and then it happened again. This time even louder.

“What…what is that?” Alice asked nervously.

For a minute, all ears listened carefully. They could hear the guard shuffling about nervously on the deck, but the eerie cry was not heard again.

In the morning, at first light, Clement gave the order to pull anchors and the fleet sailed out of the bay and began its exploration of the coast. Within a short time, they discovered an inlet and took a sounding. They were still at 20 fathoms, but as they entered the inlet the water became shallower until Clement decided to not risk going any further. He was afraid that they might hit a sandbar or rocks. They could see snow covered mountains with a little shrubbery but no trees. Clement decided that they could haul some wood and replenish their water there. He ordered both skiffs lowered and a barge to tow the wood and water barrels. The water was cold with a thin layer of ice along the shore. They would have to be extremely careful when landing. Clement attempted to dissuade Dagena from coming along, but of course she was adamant about getting off the ship as was Olaf and Alice. They piled into the smaller skiff with Gorm, Esteban and Pierre, while Osment, Trousett and 8 men-at-arms and archers gathered in the larger boat with most of the gear. Baldwin and Jacques remained on the ship with the sailors. The Red Ship also lowered a boat. Clement was happy to see Adam sitting in the back, helping to row with 5 other men including Ceres. Clement had also signaled the Brown Ship, but Sir William responded that he would be delayed and to go forward without him.

The three boats rowed skillfully through a narrow fjord avoiding large chunks of broken ice that floated in the water in irregular patches. They were looking for a spot to land, a beachhead where they could construct a base camp and then make hikes into the interior to find water and wood. On both sides of them were towering grey cliffs, in some places, covered with a dead moss and ice. Finally, after a few miles they found what they were looking for. The beach was small, but there was a place where they could land and set up camp, before trekking across the snow-covered rocks.

Craig R. Hipkins grew up in Hubbardston Massachusetts. He is the author of medieval and gothic fiction. His novel, Adalbert is the sequel to Astrolabe written by his late twin brother Jay S. Hipkins (1968-2018) 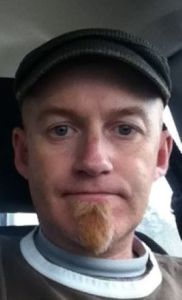 This book is available on Kindle Unlimited