A single phone call from halfway across the world is all
it takes to bring her home . . . ‘Ellie, something bad has
happened.’
Desperate to escape her ‘kid from the scrapyard’
reputation, Ellie Rook has forged a new life for herself
abroad, but tragedy strikes when her mother disappears
near a notorious waterfall. Here, according to local legend,
the warrior queen Finella jumped to her death after killing
a king. In the wake of her mother’s disappearance, Ellie
is forced to confront some disturbing truths about the
family she left behind and the woman she has become.
Can a long-dead queen hold the key to Ellie’s survival?
And how far will she go to right a wrong?

1.When and where do you prefer to write?

I’m a morning person, a lark rather than an owl, and that’s definitely my creative time, so I always try to get up early and fit in my writing then. It doesn’t always work out that way, and if I don’t manage to write in the morning, I generally have to leave it until the next day. I can never write anything decent in the afternoon (unless I’m in a café, see below) but I can edit. Perhaps I’m more practical in the p,m.!

I have to eat first (porridge, always) and then have two cups of tea while I’m writing. I usually stop at around 11 (coffee time) and answer my emails, etc. Despite having a perfectly good desk, I somehow can only write if I’m curled up on the left-hand side of my couch with the laptop balanced on the arm. This is the worst- ever typing position, but somehow it works!

3. Is there a drink or some food that keeps you company while you write?

I like a supply of kit-kats, but I have to ration them. Tea and coffee are both good, and I do like a nice latte if I’m working in a café.

I love Wuthering Heights because I’m a complete Brontë fan. I visited Haworth with some friends last year for a mini writing retreat and it was magical. We actually got to take part in a project to re-create a manuscript of Wuthering Heights (Emily Bronte’s original was lost) so that was very special indeed.

5. Would you consider writing a different genre in the future?

I’d quite like to write a historical novel. At the moment I combine folklore with a contemporary narrative, but it would be nice to step away from the modern for a while and set a book in the Victorian era, or maybe even in Pictish times!

No, although I have met people who remind me of my characters! My characters arrive in my head fully-formed, although I sometimes add mannerisms, likes and dislikes that I’ve observed in real people.

No, although I probably should. I love to eavesdrop! I sometimes dream up story ideas in my sleep, so I do have paper and pen beside my bed.

Science fiction. The very word ‘science’ fills me with dread. It takes me back to chemistry lessons at school- I hated science, so science fiction does not tempt me at all. Maybe if they changed its name…

Any of the the Brontë sisters. We’d sit around the table in the Parsonage drinking tea and gossiping, scratching away with quills!

India! I had the good fortune to be invited to the Mathrubhumi International Festival of Letter in Kerala in February this year, and then went on to Kolkata, where my previous novel Bone Deep had its Indian launch at Bee Books. I loved the craziness of the city and the friendliness of the people, so I decided to set my next novel partially in India. More news on that to follow!

Sandra Ireland was born in Yorkshire, lived for many years in Limerick, and is now based in Carnoustie. She began her writing career as a correspondent on a local newspaper but quickly realised that fiction is much more intriguing than fact. In 2013 Sandra was awarded a Carnegie- Cameron scholarship to study for an MLitt in Writing Practice and Study at the University of Dundee, graduating with a distinction in 2014. Her work has appeared in various publications and women’s magazines. 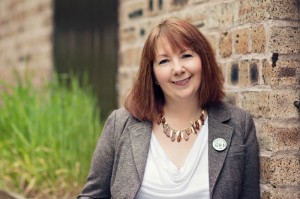