She arrived as a housekeeper
Will she leave as a countess?
To some, Thornhallow Hall might be tarnished by tales of vengeance and ghosts, but to new housekeeper Rebecca Merrickson it represents independence and peace from her tumultuous past. Until the estate’s owner, William Reid, the disappeared earl, unexpectedly returns… After clashing with him over the changes she’s made to the house, Rebecca slowly unearths the memories that haunt brooding Liam—and her defiance gives way to a shockingly improper attraction to her master! 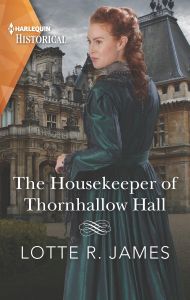 I am a daytime homebody writer! I’ve been writing on scraps and notebooks for as long as I can remember, fragments, scenes… But I learned when I finally took the step of becoming ‘a writer’, that I needed intense discipline to do so, and most of all, I needed to treat it like a job. I was lucky enough to be in a position where I had, and still have, days or big chunks of days where I can sit at my desk (that has a lovely view of the garden!), and do the work. (Whether I feel like it or not!)

It depends on where I am on a project, but generally I like to start by making sure my inbox is tidy, and that nothing is on my mind but the project. I typically review any notes I’ve made from previous sessions, (usually on a pile of post-its), and resituate myself to see where I have to go that day. In terms of starting a new project, I do always make a mini beat-sheet, and some initial character/setting notes, with my favourite fountain pen and notebooks.

I always take tea at 3, usually a nice green tea, and typically have a coffee if I’m feeling a bit worn at 11. (With a cheeky biscuit or two!) Sweets are always hidden in drawers by my desk for when I need that little pick-me-up.

Ahhhhh! The worst question I think for anyone who loves books. I have so many. One that remains from my childhood is The True Confessions of Charlotte Doyle. So much of who I am and what I write I think comes from that, along with Robin Hood. (In all his incarnations). In terms of books that have really stuck with me viscerally in recent years, I’d have to say A Home at the End of the World, and If We Were Villains. There are so many romances I can’t even begin to mention them all! As Danielle says in Ever After ‘I could no sooner choose a star in the heavens.’

Absolutely! I have some projects I’ve worked on already that are not romance – I’ve written fantasy, crime, and some historical/supernatural things. But romance is always there, always has been. And I’ve found that those things written after I really began writing romance have been better for it, particularly in terms of character development and even plotting. I’m hoping to work on a dystopian project soon, and I’d love to try my hand at a political thriller some day.

Yes and no. I definitely steal character traits from people I know, and general ‘vibes’ of people I know or have met. But there are some characters in Rosemary & Pansies (the first romance I ever wrote), that are based on real people, as I found it an easier starting point. There is only one other I can think of that is based (somewhat), on a real person, and it was very much a need for personal catharsis that influenced that choice.

Depends where I’m going! If it’s for a long period of time, yes. If it’s a shorter jaunt, say a couple hours, usually I’ll jot things down on my email now, or even scraps of paper, or receipts that I have in my bag. My notebooks get a bit heavy – and I tend to like them more for those longer writing/thinking sessions.

I honestly don’t think there is one! I’ll honestly try anything, and as with music & film, my tastes in reading are very eclectic. It’s all about the writing itself. For instance, I’m not typically a huge horror/gore fan, but if I found a book that really engaged me, and the writing compelled me, I would absolutely be there for it.

Are we talking ‘anyone alive or dead’ or someone I know? Because if the former, I think I would have to say the Brontë sisters. If someone I know, a good friend of mine, who is also a writer, though in theatre. We’ve collaborated on other things, and work really well together, so I think it could be a fun experience.

Again – so many! I love Scotland, and will return there anytime I get a chance. As for a country I’ve never been to, I think I would have to say Russia. I’ve always been fascinated by its history, its culture, the dichotomy of it. Russian art and architecture have definitely informed my own artistic practice, so I would love to have a chance, and an excuse to immerse myself in the land, and see what comes from it.

Lotte James trained as an actor and theatre director, but spent most of her life working day jobs crunching numbers whilst dreaming up stories of love and adventure. She’s thrilled to finally be writing those stories, and when she’s not scribbling on tiny pieces of paper, she can usually be found wandering the countryside for inspiration, or nestling with coffee and a book. 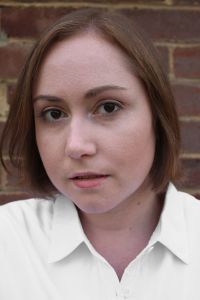