How not to be good? Let me list the ways…

Are you a woman? Do you make to-do lists to stop you losing your mind? Have you ever cried in the toilets at work, had a meltdown in the supermarket, or gone off the rails at a hen party?

And have you ever been saved from any of the above by your truly brilliant friends?

If you’ve answered ‘yes’ to any of these questions, then this is the book for you. A moving, funny and brutally honest memoir of one woman’s millennial misadventures, The To-Do List and Other Disastersfollows Amy Jones on her journeys through friendship, marriage and mental health disasters in a story that’s as relatable as it is riotous. 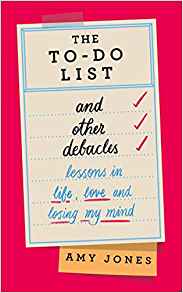 If I had to pick an ideal time to write a To-Do List, I thought, as I sat cross-legged on my bed in my pants and a bra bought three years earlier when I was a few pay rises poorer and several stone lighter, this would not be it. Twenty minutes before I’d been in a hot shower and ten minutes ago, frantically blowdrying my hair, so now my face was sore, pink and shiny from all the heat. I was covered in a thin sheen of sweat, thanks to the heat of the blow-dryer and the stress of getting ready, and my shocking mop of badly dried, frizzy hair was sticking to the back of my neck. Yet, there I was, tapping away on the Notes app on my phone. This was the cage I had built for myself, so I might as well make the most of it.

See, I live according to lists. I keep lists of books I’ve read, books I want to read, films I want to watch, recipes I want to make, presents I’ve given and presents received, potential future baby and pet names, restaurants to try, clothes I want, annual goals, and probably a few other ones I’ve forgotten. I should start a list, really, so that I can remember them all. The lists I cherish most are my ‘To-Do Lists’ – little lifebuoys that keep me afloat. I used to imagine I’d forgotten vital things and that I wouldn’t be able to remember I’d forgotten them until it was too late and the world was falling apart around my shoulders. I would panic about the things I was supposed to do on Monday and hadn’t had time for: how on earth was I going to remember to do them on Tuesday with all of Tuesday’s tasks to think about? I’d get ideas for one task or project midway through another and completely forget about it until I was just about to fall asleep, when it’d burst out in front of me and I’d come out in a cold sweat with the stress of having forgotten it in the first place. There’s so much going on in my head that one brain is not enough to keep track of it all.

To-Do Lists made all of this nonsense better. Now, I can make neat lists of everything I have to do, from washing my hair to finishing a report on time, and even if my stupid, broken brain forgets something, my Notes app will keep it safe for me. If it’s on my list, I don’t have to worry about it – I’m already halfway there. And, y’know, there’s that little rush you get when you tap the checkbox and the item disappears. A tiny little rush, a little sparkle in my chest, and I can do it whenever I want with no consequences. Some people do drugs, I add things to a To-Do List just so I can tick them off. And who’s having more fun, really? If Frank had told all those kids about To-Do Lists, the war on drugs wouldn’t be necessary.

Amy Jones was born in Wales in 1990, moved to Warwickshire when she was seven, and now lives in North London with her husband and her cat.

She has been writing since she was old enough to hold a pen – everything from fantasy stories about mermaid-fairy hybrids who live in her curtain rail, short horror stories described by one teacher as “really creepy”, or a 70,000 word Harry Potter fanfiction describing a torrid relationship between Ginny Weasley and Draco Malfoy.

Most recently she worked as AV Producer for The Pool where, alongside making the site’s videos and podcasts, she was known for her articles on feminism, body positivity, and 18th century cartoons about the devil being scared of a woman’s hairy vulva.