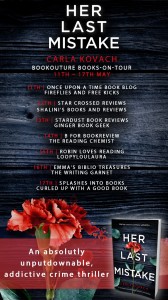 Dressed in a sage green bridesmaid dress, and smiling for pictures, Holly is the happiest she’s ever been. Hours later, Holly is dead.

People love to hate Holly Long. Smart, beautiful and a woman who men find it hard to say no to, she’s the town’s most gossiped about resident.

Now Holly’s body lies in her hotel room, strangled at her best friend’s wedding party. And the gossip has stopped, because nobody wants to look like they did it.

When police search Holly’s immaculate apartment, amongst her stylish furnishings and expensive jewellery, they discover a different side to Holly. Orderly and precise, she wasn’t the chaotic party girl everyone thought her to be. In fact, Holly was a planner, and her next plan was to come out and tell her biggest secret – something she had been hiding for months, something that had the potential to ruin the lives of more than one wedding guest.

There are plenty of people who might have wanted to kill Holly, but only one who has finally made good on their promise.

I love this kind of books where the writer chooses to divide the story in short chapters. It not only encourages me to read one (or several 😉 ) more chapter(s) especially when it’s getting late at night, but it also makes it more fast paced.

Some books start at a low and build up. This one already starts at a high and that can make you wonder whether this can even be topped. And yes, it certainly can! There is never a low in this story.

I fell asleep last night with the book in my hands. Noooo, it was not because of the story but because it was already way past midnight. I woke up about an hour later and I started reading again. That’s how addictive this one is!

I fried my brain trying to figure out who was behind all these horrible things, but as usual to no avail. I had to wait for the author to reveal everything to me.

DI Harte is torn between her private life and her professional one. Will she be able to deal with both? 5 stars

Thank you, Carla Kovach and Bookouture

Carla Kovach was born in Birmingham, UK and now resides in Redditch, Worcestershire. Author of supernatural drama ‘Flame,’ psychological thriller ‘To Let,’ crime thriller ‘Whispers Beneath the Pines,’ and holiday comedy, ‘Meet Me at Marmaris Castle.’ Carla also writes stage and screenplays, some of which have been produced in the Worcestershire area. Her feature film ‘Penny for the Guy’ is being made and is set for release in 2019.