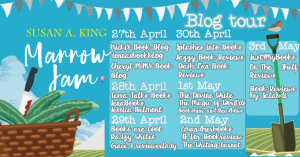 Some people would describe Beattie Bramshaw as a pillar of the community. Many would applaud her numerous successes in the bakery competition at the annual village show. A small number might say, if pushed, that they find her a little on the bossy side. And one or two might just whisper the words ‘interfering’ and ‘busybody’ behind her back.

But no-one would have her down as a murderer.

So why is she being questioned in Dreighton police station after being found in the local allotments, at the dead of night, wielding a kitchen knife just yards away from where local lottery winner, Yvonne Richards, was found stabbed to death? And what does all of this have to do with Doug Sparrow’s prize marrows?

Marrow Jam is a comedy crime caper in the spirit of Agatha Raisin. It will have you chuckling all the way through many a cup of tea.

I like to put aside a few hours for my writing so I generally write on days off and weekends.  It can take me a while to get in the zone and although I’ve tried writing in the evenings, they don’t tend to be the most productive hours. I’m lucky in that I have a writing room (guest room), away from distraction.

Not a deliberate one, but my laptop is a few years old now and can take a while to fire up. When its grunted itself into life, I start by opening Word, wait a few minutes to open Google in case I need to research something, and then a few minutes later, my constant companion, Spotify.

I’m lucky in that I have a husband who wholeheartedly supports me in my writing. Practically, every hour on the hour a fresh brew arrives at my side, mostly tea, but when he sees I’m flagging a coffee has not been unheard of. Food is a no go. Have you ever tried typing while eating a sausage sandwich?  I did, it wasn’t pretty.

Not a very original choice, but it has to be Pride and Prejudice. Jane Austen’s home is not far from where I work and I treasure the Darcy bookmark I purchased there.

I often think of it, but I’m having so much fun writing about Beattie at the moment, it’s a little way off yet. If I were to diversify, I would like to try my hand at dystopian. The ability to build another world where you get to make up all the rules is a fascinating thought.

I love people watching and, although there is an element of characterisation based on the people I know, a lot of it comes from observation of the public in general.

There are many times I’ve wished that I did, but no. When something comes to me I tend to say it over and over in my head in the vain hope I’ll remember it. I do now have one next to my bed. I generally find the best (and sometimes the worst) ideas occur just as I’m about to nod off.

It’s not that I don’t like it, but the genre that appeals to me less is horror.

If she hadn’t been taken from us, it would be Victoria Wood. Her wit and timing were faultless and I have several of her books containing the sketches from her shows.  Jenny Éclair would be my next obvious choice. Her novel ‘life, death and vanilla slices’ had me laughing out loud one minute and crying the next.

In an ideal world, I would base all my books in Italy so I had a ready excuse to jump on a plane. I love the pace of life there, the architecture and history and, not forgetting of course, the pizza and gelato.

Thank you, Susan A King and Rachel’s Random Resources

Susan A King lives with her husband in a quiet suburb in Hampshire. Between them they have four grown-up sons, all of whom have now flown the nest.
The inspiration for her first novel, Marrow Jam, came from her long experience and observation of competitors at the annual Romsey Show, where she regularly aspires to win Best in Show with her floral arrangements.
Marrow Jam, was shortlisted for the Write Here, Right Now novel competition, Bradford Literature Festival and is published by Eye/Lightning Books.