When everyone hides the truth, who do you turn to?

Becca’s had a hard time of it, but she has finally got her life together. She has a nice little flat, a steady job pulling pints, and she’s even seeing someone new: Andy, who keeps his private life to himself but is always good for a laugh. And then Andy vanishes. When his body turns up on isolated Sunk Island, Becca learns Andy wasn’t just another punter. He was a police officer, deep undercover, investigating a drugs ring that he believed operated out of Becca’s pub.

Staggered by the betrayal, Becca turns to the only person she thinks she can trust: her foster mum, Kay. But Kay has problems of her own. She’s just moved into a short-term let in the hopes of finding some peace and quiet. But peace and quiet are hard to come by on Sunk Island . . .

Before long, both women are drawn into a terrifying world of drugs, money and death. 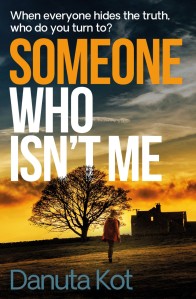 Andy Yeatson was twenty-four, and he was becoming more and more certain that he was going to die.

He shifted on the back seat of the car as though he was trying to get comfortable and touched the door to feel where the lock was. ‘How long is this going to take?’ he asked. The girl, who was driving, didn’t respond.

The woman, in the front passenger seat, half-turned her head. ‘Don’t worry. It isn’t far now.’

It was the woman who had met him just outside town, her hair hidden under a beanie, her face half obscured by dark glasses. Her conspicuous attempts at concealment confirmed the opinion he’d been starting to form about this lot: amateur hour.

Now he wasn’t so sure. She looked up briefly and he caught her masked gaze in the mirror. There was something in her face that send a chill through him. Amateur or not, they were dangerous.

It had started out well enough. He’d gone to the car park near the pub, and the woman had called him. She’d told him to meet her at a junction off the A165. When he got there, the car was parked, waiting. The woman was leaning against the bonnet, the girl already behind the wheel. ‘So where’s this Stoner?’ he asked. Stoner was the person he was supposed to see, the person with the contacts.

‘Patience,’ she said, opening the car door. ‘Get in. We’ll meet him there.’

He didn’t feel happy about changing cars, but there didn’t seem to be much choice.

The woman chatted in a desultory manner as they drove down the road that followed the coast. The girl said nothing, just followed the woman’s directions. Andy caught her eye in the mirror once and smiled at her. She went a bit pink and looked away. She was a pretty girl with a mop of fair hair – too nice to be hanging out with this lot.

But the meeting place wasn’t where he’d expected, in one of the many rural locations outside Bridlington. They headed south and they’d kept on going, and now he was worried. He wasn’t surprised they were taking precautions, but this long drive south? He didn’t like it at all.

He glanced out of the back window, and realised they had picked up an escort. He’d been aware of a bike in the road behind them, but instead of passing them and driving on, it stayed about forty metres behind them, shadowing them all the way.

At first, he thought it might be police, his colleagues, something his boss, Mark Curwen had set up and felt a flood of relief that made him realise how frightened he was. But it wasn’t police. Their follower wasn’t concealing himself, just keeping steadily on the same route as they headed south, and further south.

The girl who was driving asked, ‘Why do we need to all this way?’

‘Do I pay you to ask questions?’ the woman snapped.

Andy listened with half an ear, looking out for landmarks as they drove down the coast, the motorbike a constant, on their tail.

The road stretched ahead between flat, empty fields. He hadn’t seen a building for miles. If they kept going this way, they’d end up in the Humber Estuary.

His stomach gave a lurch. He didn’t like the thought of the estuary.

Danuta Kot (who also writes as Danuta Reah and as Carla Banks) grew up with stories. Her Irish mother and her Polish father kept their own cultures alive with traditional tales they shared with their children. For many years, she worked with young people in Yorkshire who were growing up in the aftermath of sudden industrial decline. She uses this background in her books to explore some of the issues that confront modern, urban society: poverty, alienation and social breakdown, using the contexts of the modern crime novel. She now works as a senior education consultant, work that involves travel to establish education and training in other parts of the world. She is a regular academic speaker at conferences and literary festivals and has appeared on radio and television.