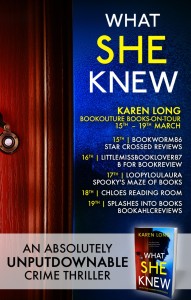 With the sound of the doorbell, the past she ran from catches up with her.

Baby on hip, Angela Myles hums as she lays out breakfast before the school run, when an unexpected knock on the door stops her in her tracks. But when she sees the familiar face through the peephole, she immediately tries to run with her kids out the back door. Because Angela knows her visitor, she knows why they’re here, and she’ll never give up her children.

Hours later, as the police talk softly to Angela’s terrified children, trying to unpick her last moments, they wonder what other secrets she was hiding from those around her. And then another woman goes missing. How many more will pay the price for Angela’s silence?

What She Knew was previously published as The Cold Room. 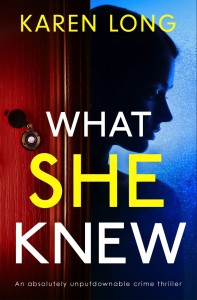 Normally when a killer is behind bars, the case is often closed for the police force. Now it’s up to the judge and the jury to decide about the sentence. DI Raven keeps being called back though to be given more information or to be sent on a wild goose chase?

Evil never sleeps. DI Raven and her partner are dealing with more cases than they can handle and partnering with other teams is necessary.

Some murders are violent and gruesome. Others revealed details that made my stomach do a few flips and some things were not what they seemed at first sight.

Who are the culprits they are looking for? They seem so different in one way and so alike in another way.

Very confusing at first, but rest assured you will be rewarded in the end by the outcome. I was shocked by the way twisted minds can camouflage themselves using fragile people to do what they dream of but are afraid to act on themselves???

Thank you, Karen Long and Bookouture

Karen Long was born in Wolverhampton but has spent the last few years living in California. She worked as an English and Drama teacher for many years, before becoming a full-time writer.

She has written screenplays and articles, but primarily dedicates her time to writing crime fiction and observing wildlife. She loves to travel, which is a great source of inspiration; Toronto became the backdrop to the Eleanor Raven series of thrillers after Karen spent several months there.

A passionate conservationist and lover of the crow family in particular, she has rehabilitated and adopted ravens, crows, magpies and rooks, many of whom became integrated into family life, much to the distress of household members and soft furnishings. She now volunteers regularly at Los Angeles Oiled Bird Care Centre.