It is late 1942. Group Captain Robert Sutherland’s first week in charge of Military Intelligence 11’s operations in Scotland and northern England is not going smoothly. A murder at the Commando Basic Training Centre in the Highlands is being investigated by one of his teams, until events take an even darker turn that draws Bob in personally. He is also trying to discover who was behind an attempt to steal an advanced reconnaissance aircraft from a military airfield in Fife, an investigation made no easier by the perpetrator’s death. The complication he could really live without comes via a telephone call from Monique Dubois in MI5. An operation she’s been running in Glasgow, without Bob or anyone else knowing, has gone badly wrong, and she wants him to intervene before it is entirely compromised. The Danger of Life is a fast-paced thriller set in Scotland during the Second World War. It is Ken’s second novel to feature Bob Sutherland and Monique Dubois and picks up not long after the end of his first, Eyes Turned Skywards. The action moves back and forth across Scotland, with much of it set in Lochaber, where the present war intersects with another conflict that took place two centuries earlier: with deadly consequences. 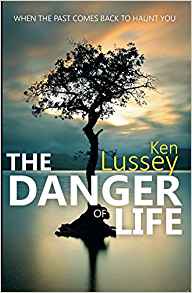 I tend to write in fairly intensive spells of 6 to 8 weeks, which is about how long it takes me to produce the first draft of a novel. That comes on the back of months of thought and research, and precedes months of editing, checking locations on the ground, then more thought and re-editing.

As for “where”, I write at my desk. If the spirit is willing and the course of the next chapter or two is clear, I can shut out everything else and simply let the words flow out of me and onto the screen.

No. I will have a general outline of where a book is going when I start, but the details tend to emerge either between writing sessions or, quite often, during the process of writing. Some of the best twists and developments have not been pre-planned, they’ve simply emerged out of the story itself as I’ve been telling it.

Just one? Tricky, but the one that would be at the top of the list is Jonathan Livingston Seagull by Richard Bach. That, without doubt, is the book that has stayed with me always. There are not all that many words in it, but each one is exactly right; and for me the result is deeply moving.

I’ve written historical thrillers set in Scotland in the Second World War, two of which have now been published, and contemporary thrillers set in Scotland, which have not yet been published. Science fiction and fantasy have always appealed to me as a reader, but less so as a writer. The only other genre I’ve dabbled with in terms of putting words on the screen – though not many – involves changing the historical era. I have a completed prologue for a thriller that has one scene set in 53BC in the aftermath of the catastrophic Roman defeat by the Parthians at the Battle of Carrhae; and a second in a crashing Russian airliner over central Asia on 11 May 1973. Now I just need the rest of the novel that connects these two real events together.

Probably. I suspect that every author does, to some extent. How else can we know how our characters will act and react? But not deliberately, or (I hope!) identifiably.

Yes, I have a text editor on my iPhone set to be used without access to my reading glasses. Without it, it’s all too easy for ideas to evaporate like dreams as you awake.

I review a lot of books, which has broadened my horizons hugely. There are good books in every genre.

A number of different central Asian countries along the traditional route of the Silk Road: in order to find settings for the unwritten novel whose prologue I talk about above.

Ken Lussey spent his first 17 years following his family – his father was a Royal Air Force navigator – around the world, a process that involved seven schools and a dozen different postal addresses. He went to Hull University in 1975, spending his time there meeting his wife Maureen, hitch-hiking around Great Britain, and doing just enough actual work to gain a reasonable degree in that most useful of subjects, philosophy.

The next step seemed obvious. He researched and wrote ‘A Hitch-Hiker’s Guide to Great Britain’, which was published by Penguin Books in 1983. An inexplicable regression into conformity saw him become a civil servant for the next couple of decades, during which time he fulfilled the long-held ambition of moving to Scotland. In more recent times he has helped Maureen establish the website ‘Undiscovered Scotland’ as the ultimate online guide to Scotland. ‘Eyes Turned Skywards’ was his first novel and ‘The Danger of Life’ is his second.