On the road. With a serial killer.

It begins with a list of names – past and future victims. When struggling reporter Tom Pritchard receives it in the mail, he’s scared, though he knows this could be the story he needs to save his career.

Especially if he can help the police to catch the killer.

But this isn’t a typical murderer. This is someone patient and ruthless, someone who’s been planning for years. Soon, the tables are turned and Tom finds himself trapped on a terrifying road trip across the US, racing from victim to victim. His only hope of saving his family is to understand the killer but, to do that, he’ll need to be close. And although he doesn’t know it yet, that’s exactly where the killer wants him to be. 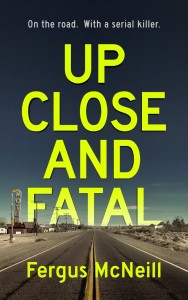 It’s a foggy April morning in upstate New York, and I’m staring out the window of a Greyhound bus, on my way to meet a murderer. He’s not in jail, and nobody knows who he is, not even me.

The weather’s strange and uncertain. The sun’s a faint circle of cold white, lost in the pale grey sky. Walls of mist roll across the tree-lined slopes. This is a ghost of a landscape, fading in and out of view. We pass farms… a white wooden house, with its broad porch and steep-pitched roof… rows of rusting mailboxes at the end of lonely dirt tracks. Now and then, there’s a huddled small town, or a forgotten gas station. And then the trees close in again, and I see my own face – messy hair, tired eyes, stubble shadowing my jawline – a nervous reflection flickering in the glass.

I’ve been told to get off at a little place in the middle of nowhere and await further instructions. Part of me is eager, impatient to get there… but part of me wants to hunch down in my seat and stay on the damn bus.

Leaning back against the creaking leather headrest, I let my eyes close for a minute, listening to the steady rumble of the road, the thin beat of music bleeding from the earphones of the kid sitting in front of me. It’s already been a long day, and I’m tired and tense and cold. The message came through just a few minutes after midnight, and there was no chance of getting any sleep after that.

His voice has that Southern-accented warmth to it, a calm dignity that I find deeply unnerving. We’ve spoken twice on the phone – once when he first laid out his proposal, and again when he called to get my answer – and he’s always been so polite. Even when he warned me about the ‘severe’ consequences if I disobeyed his instructions, he sounded like the maître d’ at a good restaurant, smiling as he confirmed who would be getting what. It was only afterwards that I found myself thinking about just how ‘severe’ those consequences could be.

I could pretend that this whole thing was just an elaborate hoax, somebody’s idea of a practical joke, or a big old fuck-you from someone who doesn’t like what I write. They say a journalist isn’t doing his job unless he ruffles a few feathers, and I’ve certainly done that… but, sitting here now, I don’t have any doubts. All my instincts tell me this is real.

My fingers begin tapping out a nervous rhythm on the worn leather of the empty seat beside me, and I have to force myself to be still, taking a slow breath, trying to relax. It’s natural to be scared. This is a million miles outside my comfort zone and, if it’s genuine, then I’m taking an insane risk by coming out here… but I know the importance of what I’m doing.

The bus slows as it rounds a bend, then drops a gear, climbing between the tall pines that crowd in along the edge of the road. I glance down at my watch. Not long until I find out who’s waiting for me, here in the grey morning wilderness.

I think he’ll be older than me, probably the wrong side of forty, but it’s hard to be sure from just a voice on the phone. He speaks with a quiet confidence, and he calls himself “J”; at first, I thought he meant his name was Jay, but now I think it’s just an initial. Other than that, I don’t know much about the man I’m going to meet. Only what he’s done.

Then again, he doesn’t know about the two unmarked police vehicles, shadowing the bus, just a few cars back. He may think I’m just another journalist, willing to do anything for a story, but I’m better than that.

I’m going to catch a killer.

As well as writing crime novels, Fergus McNeill has been creating computer games since the early eighties, writing his first interactive fiction titles while still at school. Over the years he has designed, directed and illustrated all sorts of games, spoken at the Cannes Film Festival, and failed to excel at any sport whatsoever. He wishes he could cook.

Fergus lives in Hampshire with his wife and their enormous cat. He is the author of the Detective Harland series (EYE CONTACT, KNIFE EDGE and CUT OUT, plus the short novella BROKEN FALL) and the historical thriller ASHES OF AMERICA.