A Kitchen Witch with a bite, a King of Hell on a mission, and a candy coated town hiding bitter secrets.

Josie Benoit, gourmet patissier and kitchen witch, may not be a Sweet Pea native but she’s made the small town her home and she intends on keeping it that way. When trouble rolls into town on the seats of shining motorcycles, and the safety of her home and her own reputation are put at risk, Josie bands together with her coven to protect her world from a dark influence.

If only that dark influence wasn’t so deliciously handsome.

King Beleth is not a demon to be trifled with.

Leader of the Hell’s Bells MC and one of the great warlords of the Bowels, Beleth takes pride in his work and has the patience of a… man who knows what is best is worth waiting for. Known as Bell—to his friends, which you are not—he’s come to Sweet Pea to dismantle the core of good at the heart of the little town. But upon arrival he discovers three things that might just get in the way of his work:

Sweet Pea is more disgustingly adorable than they were warned.

The town has a coven of witches protecting it. 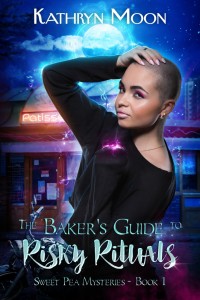 By the light over her door he could see the shadows growing on her throat, anger boiling in his gut.

Josie turned her head and tilted it back to look up at him. There was no reserve in her gaze, no fear, no teasing.

You’ve already lost the battle, he thought, but he wasn’t sure which of them he meant. His hands reached up, and Josie didn’t even flinch as he cupped his fingers over the growing bruises. Warmth spread through his touch into her skin, ready and willing this time, and Josie sighed, her eyes drifting shut in relief. When she opened them again. there was something in their dark depths that Bell recognized as inherently dangerous to his well being. And in spite of that he might have considered standing there and soaking it in for another hour, or week at least.

“Goodnight, Cupcake,” Bell said, head tilting down to hers, before he caught himself and turned away.

His haste in pulling away on his bike was born out of self-preservation more than impatience to leave.

Kathryn Moon is a country mouse who started dictating stories to her mother at an early age. The fascination with building new worlds and discovering the lives of the characters who grew in her head never faltered, and she graduated college with a fiction writing degree. She loves writing women were are strong in their vulnerability, romances that are as affectionate as they are challenging, and worlds that a reader sinks into and never wants to leave. When her hands aren’t busy typing they’re probably knitting sweaters or crimping pie crust in Ohio. She definitely believes in magic. 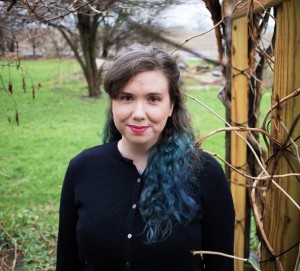