In April 1990, as rioters took over Strangeways prison in Manchester, someone killed a little boy at Black Moss.

And no one cared.

No one except Danny Johnston, an inexperienced radio reporter trying to make a name for himself.

More than a quarter of a century later, Danny returns to his home city to revisit the murder that’s always haunted him.

If Danny can find out what really happened to the boy, maybe he can cure the emptiness he’s felt inside since he too was a child.

But finding out the truth might just be the worst idea Danny Johnston has ever had. 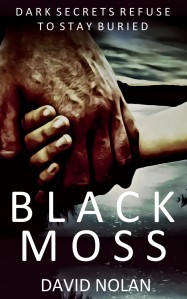 I am happy to share an extract with you. I hope you will be tempted to read the whole story. Enjoy!

Radio reporter Danny Johnston has been sent out to a remote reservoir on the outskirts of Manchester. He finally finds it. There are two policemen trying to shield a crime scene from prying eyes out on the moors. There’s quite a lot of swearing in the book. Nearly all the characters are police officers or journalists, so if anything, I’ve toned the swearing down a bit!

‘Morning,’ Danny said. ‘I’m from Manchester Radio. Is the senior officer about, please?’

‘Fuck off mate,’ one of the PCs shouted, struggling in the wind with the white sheet. ‘We’re not supposed to talk to you… But fuck off anyway.’ The officer was a similar age to Danny. His face was as pale as the sheet he was grappling with and he appeared to have vomit down the front of his uniform. His helmet was lying on the floor close to his feet. It was speckled with wet sand.

Danny was about to go into his spiel – the one he had been told to trot out in circumstances like these – about how that this was a public right of way and he wasn’t causing any obstruction. The usual stuff. As he was about to start speaking the harsh moorland wind whipped hard against the sheet and pulled it from the hand of one of the policemen. One side of the plastic flipped left to right and flew into the face of the other PC, exposing the area of beach they’d been trying to hide. Danny looked down and saw the body of a small child lying face down in the sand. His tiny legs just touched the path. It was a boy. At least, it looked like a boy. A bloated, puffy, white thing, but a boy nonetheless. Nine, maybe ten years old. He was wearing socks, sandals and grey school shorts. His hands were bunched into fists and looked black like they’d been dipped in black paint. His arms and neck were bare, but his torso was covered with a shiny black strapping that had been wrapped around and around his back and chest. His face was almost entirely buried in the sand, but Danny could just make out the corner of his mouth. It was curled up. Like he was smiling. Danny had never seen a dead body before. Ever. ‘Christ Almighty,’ said Danny. ‘Poor kid. Christ.’

‘No pictures, you fuckin’ vulture,’ said a third officer, who ran towards the group as his colleagues struggled to put the sheet back in place. ‘Get back to the road. I mean it. Fuck off out of it. Right now.’

Danny half-heartedly waved his microphone in the policeman’s direction and stepped back. ‘I’m from the radio,’ he said quietly. ‘We don’t do pictures. We do sound. Christ.Poor kid.’

Thank you, David Nolan and LoveBooksGroup.

David is a multi award-winning author, television producer and crime reporter. He has written a dozen books including Tell the Truth and Shame the Devil, the true story of the largest historic abuse case ever mounted by Greater Manchester Police. He presented a BBC Radio 4 documentary based on the book called The Abuse Trial. It won both the Rose D’Or and the New York International radio awards in 2016. Officers involved in the case helped David with the police procedures featured in Black Moss, particularly the way the system deals with missing children.