Her eyes were closed. From a distance the blood around her neck might have looked like a necklace, but up close her body told a different tale. She had been murdered. A tiny songbird lay beside her, its neck broken…

Detective Tom Fabian’s past is catching up with him. It has been years since the most famous case of his career – when his evidence put infamous serial killer Christopher Wisher behind bars forever. But when Wisher summons a reluctant Fabian to his prison cell to hand over a diary, he realises that Wisher’s twisted games are far from over.

Shortly after Fabian’s visit, Wisher is found dead in his cell. And a few days later, the police find a woman’s body bearing Wisher’s signature, a dead songbird. But the police never released this detail to the public … so who has Wisher been talking to?

Fabian is desperate to find the killer before another innocent life is taken. But as more bodies turn up, Fabian begins to realise that Wisher may have handed him the clues before he died. Is the twisted serial killer still pulling the strings from beyond the grave…?

I am not a fan of cliffhangers in the last chapter unless I know there will be a sequel. So after reading the previous book, I could hardly wait to see what would happen next, because I can asure you, my mouth was still hanging open …

And finally, there was the next story. The more psychotic the killer, the more I like it. And this one was one to treasure, one you can find in the top drawer of a thriller author.

I think it’s best to read the other book as well, because the author creates a certain atmosphere that continues in the second one.

The story is fast paced and maybe a bit to abrupt towards the end but with a gem of a cliffhanger to keep you, well yes, hanging untill the third volume.

I hope, dear author, we will be able to enjoy that one real soon as well.

Richard Parker is an ex TV script writer, script editor and producer who now writes dark, stand alone thrillers. His first novel, Stop Me, was nominated for a Dagger Award.  The movie rights to his second, Scare Me, have been bought by Hollywood studio Relativity Media with screenplay completed by Wentworth ‘PRISON BREAK’ Miller and his third, Stalk Me, rode high in the US and UK Amazon charts 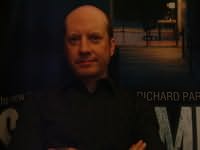