It’s hard to escape a brutal past…

A vicious serial killer is on the loose. Victims include an academic and notable members of Edinburgh’s high society.

When Detective Sergeant Jane Renwick learns through DNA that a member of her family could be the killer, she is banished to the sidelines of the case and forced to look on impotently as the hunt for the killer ramps up.

Frustrated, she decides to conduct her own investigations.

Has someone from her estranged birth family returned to haunt her? And where will the killer strike next?

It’s a race against time…

He felt the blow of dismissal, like everybody had always dismissed him. How dare they? How dare he? This foreigner didn’t even belong here. None of them did. None of them deserved the time of day, never mind the air they breathed. He would soon stop all that.

He smiled and took a few steps into the room.

“What you busy with? It’s late to be working.” He walked around the desk, took out his blade, and punched it into his victim’s carotid artery with practised precision. He dragged the blade across the neck to slice the artery, a quick second slice to make sure, but the first cut was the deepest. He made no errors, no mistakes. There was no hesitation. His victim stared at him, clutching his throat as the life blood ran out of him. All over the desk, all over the laptop computer, all over the important work that had required his dismissal. The blood sprayed over the desk, spattered the bookcase and into his mouth. That tinny, metallic taste he had come to enjoy. He would need to wipe his face before he left the room. It was a lucky break that he had a packet of tissues.

He smiled as his victim held his neck, the struggle, the gurgle, the death rattle of the man who tried to hold the life sustaining liquid in his body. They all did that. Again, ridiculous. It would never work. Not for long. It splashed through his fingers and onto the floor. That carpet hadn’t been up to much before, and it wasn’t worth shit now.

The man flopped over the desk. He wondered if that action had broken the laptop. Not that he really cared, the computer would come with him anyway. He grimaced. Having to rummage through the bloody pockets to get the phone was nasty, but he didn’t want to leave anything behind. Good! Got it first time. A decent one. It would get a bob or two.

He chuckled as he thought how confusing this would be, because this one didn’t fit with the profiles of the other victims at all. It wasn’t possible, this one had nothing to do with anything. Maybe it was a good thing he had missed her. Good name he came up with too, Joy Tuesday. Pity nobody would ever know or be able to share it. Poor Policeman Plod. This one would make no sense, yet they would have to make it fit.

He left as quietly as he had come, laptop under one arm, phone in his pocket, bloody blade in his belt. Then he saw her, the right fucking woman, whatever her name was, he couldn’t remember now because of the excitement. The green flash at the front of her hair was quite endearing. This evening, she had had a lucky escape, but he would be back.

Val Penny’s other crime novels, Hunter’s Chase Hunter’s Revenge, Hunter’s Force Hunter’s Blood and Hunter’s Secret form the bestselling series The Edinburgh Crime Mysteries. They are set in Edinburgh, Scotland, published by darkstroke Her first non-fiction book Let’s Get Published is also available now and she has most recently contributed her short story, Cats and Dogs to a charity anthology, Dark Scotland.

Val is an American author living in SW Scotland with her husband and their cat. 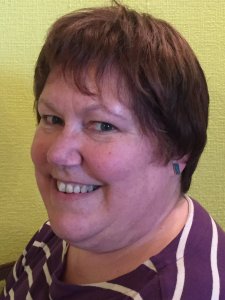