In a secret lab, a team of doctors and scientists funded by a mysterious billionaire create the first human replica entirely from technology. The robot is prepared to host the digitized consciousness of Tom Nolan, a family man suffering from a terminal illness.  But when Tom’s replica escapes before the transfer can take place, he is faced with the horrors of an alter ego bent on death and destruction. When the experiment draws the attraction of spies, Tom is caught up in an international crisis with a showdown that could change the course of the world. 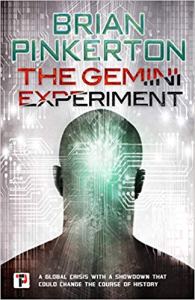 After landing at O’Hare, Alex was impressed by how well his legs adjusted to a swift walk through the international terminal. Typically

after such a long flight, his legs would be sore and stiff, but he felt no such pain whatsoever. He was built for maximum comfort.

As he worked his way through the long, wide corridors that wound through the airport, someone called out one of his names. He

hesitated as to whether to stop and answer or keep going. When the voice became persistent and louder, he knew he had to respond.

Alex stopped in the center of a pedestrian tunnel. He turned as a continuous swarm of people moved past him in either direction. From

out of the crowd, a tall, smiley man in a wrinkled blue suit emerged, laptop hanging off his shoulder on a strap.

“Tom, oh my goodness, what are you doing here?”

When Alex just stared at him uneasily, the man said, “It’s Dean Carruthers. We worked together at Slawin and Peabody, remember,

fresh out of law school?”

Alex became Tom and smiled with a snap of recognition. “Oh yes, I remember. Dean at Slawin and Peabody. How are you?”

“No,” said Dean. “The question is how are you? I heard about you getting sick…and then this trouble. Are you out on bail or what?”

Alex did not like this encounter and knew he had to choose his response carefully. “It’s all getting sorted out,” he said. “It’s not like

it appears. Listen, I have to catch a ride.…”

“I can help,” Dean said. “Seriously. I’m an attorney with Trabaris and Kaplan downtown. We specialize in criminal cases. We can

assist you. You’ve got Lowrey’s disease, right? That’s what I heard from the grapevine. Okay, well, that’s your defense. You’re sick, the

stress, maybe there’s brain issues related to Lowrey’s that created poor judgment and altered your behavior. Maybe it was the meds, right?

Let me represent you.”

Dean’s naturally loud, exuberant voice was raising Alex’s anxiety level. People passing by were starting to stare at the two of them.

Alex didn’t want any attention drawn his way. This blabbermouth lawyer was going to mess up his plans before he even got started.

“I’m your friend, I want to help, and I won’t take no for an answer,” said Dean.

Alex didn’t need a protracted argument standing in the middle of a crowded airport terminal. “Okay,” he said. “Let’s talk. But let’s

Alex quickly looked around and spotted a nearby men’s room. “In there,” he said.

Alex and Dean entered the men’s washroom. An Asian man was finishing up at a urinal. Alex and Dean stood off to one side, silent,

until the Asian man left. Alex glanced beneath the stalls, then turned to Dean. “Okay, we’re the only ones in here. I just didn’t want to

talk about it out there.”

“Totally understand,” Dean said. “So, what’s your current situation? Out on bail? You’re not here looking to skip out of the country,

“No, nothing like that. I’m not out on bail, either. To tell you the truth, I’m still a wanted man.”

“No,” said Alex. He held up his forefinger. “Number one…we can’t have you.”

“What?” Dean said. It was the last word he would ever utter.

Alex jabbed his finger into Dean’s throat. He plunged it deep, a powerful insertion of several inches of steel. He pushed Dean

backward, crashing him through an open stall door, and slammed him into a sitting position on the toilet.

Alex pulled out his finger and a rapid stream of blood escaped from Dean Carruthers’ jugular vein. He was rapidly losing consciousness.

Alex adjusted him to make sure he stayed balanced on the toilet and then quickly backed out of the stall and shut the door.

As Alex washed his hands in the sink, a couple of men entered the bathroom and shuffled over to the urinals, oblivious of the dying

man at the far end of the room. Alex exited the bathroom with great calm, expecting a few minutes to pass before someone spotted a

growing puddle of blood emerging from the stall, and then several more minutes before authorities arrived on the scene and attempted

to figure out what they were dealing with.

That gave Alex all the time he needed to reach a set of doors leading outside to a loud, honking, exhaust-spewing line of cars picking

up passengers. Identifying a license plate, Alex found his ride, two members of the Russian spy cell team in Chicago. He climbed into

“All good?” asked Yefim, the driver. Alina sat in the front passenger seat.

“Everything is good,” Alex said, shutting the door with a slam. The black sedan pulled away from the curbside chaos and entered a

thick throng of traffic, departing from the terminal with growing speed.

Brian Pinkerton tells stories to frighten,amuse and
intrigue. He is the author of novels and short stories in the
thriller, horror, science fiction and mystery genres. His books
include Abducted (a USA Today bestseller), Vengeance,
Anatomy of Evil, Killer’s Diary, Rough Cut, Bender, Killing the
Boss and How I Started the Apocalypse (atrilogy). Select titles have also
been released as audio books and in foreign languages. His short stories
have appeared in PULP!, Chicago Blues, Zombie Zoologyand The Horror
Zine.
Brian has been a guestauthorand panelistat the San Diego Comic Con,
American Library Association annual conference, World Horror Convention
and many other literaryand genre events. His screenplays have finished in
the top 100 of Project Greenlightand top two percent of the Nicholl
Fellowship of the Academy of Motion Picture Arts and Sciences. Three of
the scripts have been compiled in acollection, Unreleased.
Brian received his B.A. from the University of Iowa, where he took
undergraduate classes of the Iowa Writers Workshop. He received his
Master’s Degree from Northwestern University’s Medill School of
Journalism.
Brian lives in the Chicago areaand invites you to visit him on Facebook,
Goodreads, Twitterand at http://www.brianpinkerton.com. Brian is also a cartoonist
and his web site includes his deranged cartoon series, The Ruts.