Female characters. When fifty per cent of your potential target audience is female, if you’re not writing them in your screenplay or novel? You’re making a BIG mistake!

But how should you approach your female characters? That’s the million-dollar question … After all, women in real life are complex, varied and flawed. Knowing where to start in creating three dimensional female characters for your story is extremely difficult.

So … perhaps it’s easier to figure out how NOT to write female characters?

Script editor, novelist and owner of the UK’s top screenwriting blog www.bang2write.com, Lucy V Hay has spent the last fifteen years reading the slush pile. She has learned to spot the patterns, pitfalls and general mistakes writers make when writing female characters – and why.

In How Not To Write Female Characters, Lucy outlines:

Lucy is on a mission to improve your writing, as well as enable diverse voices and characters to rise to the top of the spec pile. 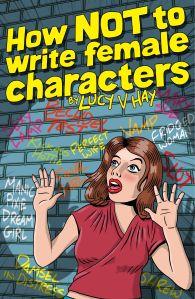 Lucy V. Hay is an author, script editor and blogger who helps writers via her Bang2write consultancy. Lucy is the producer of two Brit Thrillers, DEVIATION (2012) and ASSASSIN (2015), as well as the script editor and advisor on numerous other features and shorts.  Lucy’s also the author of  WRITING AND SELLING THRILLER SCREENPLAYS for Kamera Books’ “Creative Essentials” range, as well as its follow ups on DRAMA SCREENPLAYS and DIVERSE CHARACTERS.