fabulous mum. So imagine her distress when Henry, her youngest child, goes missing …

Henry returns safety accompanied by a stranger, Cora, a fairy godmother who starts to change the Baxter family’s lives in the best of ways. So why

do things suddenly start going wrong? Is Cora fulfilling their dreams• or is she the start of a nightmare? 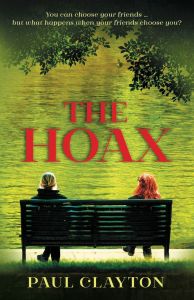 I used to love comics as a child. I was lucky enough that we have them delivered with my parents newspaper. The Beano, Topper, Rizzo, Dandy, Eagle Boys. I remember my friend’s reading from photographic comics, Superman, Batman like, but I never made the transition. I suppose it’s because I like words to paint the pictures and I like the reader to be able to make things up in their head. The great thing is that while there is lots of detail about the leading character “Frankie” in “The Hoax”, everybody will see her in their head slightly differently.

I was always allowed to read going to bed as a child. 15 minutes became half an hour and now as an adult it’s not unknown for me to start reading and find that I’m still engrossed in a book 90 minutes later. My mother read a lot; back to back Mills and Boon. All the books came from the local library which was a wooden building down our school and while mum searched for her hospital romances, I would be kneeling on the floor by the children shelves to pick the likes of “Minnow on the Say” and “The  Otterbury Incident.”

I suppose there is an element of blending the real world into the story, but I’ve never actually thought of the victims in terms of somebody I hated in real life. There are a couple of people who meet a nasty end in “The Punishment” may have names from my childhood, but the naming of them was more to place the character, rather than getting revenge on something they’ve done. However it’s a great idea for a plot. Keep checking my page!

It’s great fun creating characters. The one thing we are not in charge of those actors is the name of the person we are about to play although we do create a lot of the rest of them. Getting the name right is really important. It helps me picture them. “Oh he’s not a Brian!” I might suddenly say. I do quite often use the names of people I know but not in their entirety. Again it’s just so that I have a picture of a real person in my head to write about.

I’ve written a semiregular column in “The Stage” for nearly 10 years and I try to blog on a more personal level once a month. As a younger actor I wrote lots of letters to the bank which were great works of fiction. Before email and when I did much more theatre work, I used to write long letters to friends who were away from home on theatre jobs. Nothing more exciting than receiving a letter in an envelope at the stage door. Many of my friends of The letters say how much they remind them of a particular time in their life. I think collectively they became known as “Paul’s Letters to the Thespians.”

I think a vital part of creating something exciting is interpretation. A writer writes something and then actors and directors interpret it.  I would hate it as an actor if the writer was in the room telling me exactly how to say everything, so I suspect that if one of my books were to be made into a movie or television series, I’d prefer to step back and let some very talented people turn it into what they believe it should be. Oh and I’d be in the Maldives on holiday with the fee.

While I was chairman of the actors centre in London 10 years I was very lucky to be able to do a series of lunchtime interview titled “Off the Record” in which I chatted with actors I have worked with in my career. We used to do them live for an hour at lunchtime in the grand salon at the Theatre Royal Drury Lane and the cast list grew and grew. Gary Oldman, Dame Judi Dench, Mark Rylance, Celia Imrie. And many more. I was very lucky to be able to chat to such fabulous fellow actors, but I suppose if I must have a wish list, then I think I would like unfettered access to the Queen.

Research is great fun. “The Punishment” is set in my own world, that out of work actor trying to cope with life, but there was a whole sequence involving a crematorium about which I knew nothing. A wonderful friend of mine is a very successful undertaker (there is a character in the book based on him) and he took me for a morning to a crematorium. We went backstage as it were to go through the whole process of what happened and to work out how the events in the book could take place in the real world. These days it’s all too easy just to turn to Google, but getting out and doing the research yourself gives you so much more. The sense of touch, smell, all pertinent to a particular location.

My partner is my go to person for all problems in life. Like me he’s very fond of board games, and we are both fans of Scandi Noir  on the TV. Wherever possible I don’t ask him to run lines with me when I’m learning apart, but when I’m writing I will casually turn to him over a meal and pose a question. Quite often he can say something that will clarify what I’m worried about.

People are entitled to their opinion. Enjoying a book like watching an actor in a play, is an entirely subjective experience. Nobody is right or wrong. So it’s much more interesting to read what they thought. Sometimes bad reviews hurt, both as a writer and an actor and sometimes they make me laugh. But if I want to believe the good reviews, then I have to take the bad ones on board as well. Mercifully “The Punishment” got a whole load of five-star reviews were very clear what they had liked

Best known to audiences for five series of the BAFTA award-winning Channel 4 sitcom “Peep Show” and for two series of the BAFTA winning comedy “Him and Her” from BBC 3. He has enjoyed stints as regular characters in soaps “Hollyoaks”, “Coronation Street” “Doctors” is well known to viewers from a considerable volume of the television. Most recently appearances in series 2 of “The Crown”, “Black Earth Rising”, “Wolf Hall”, “The Split”, “Holby”, “ This Time with Alan Partridge” “Shakespeare and Hathaway” “Breeders”

. He is currently well known and loved by thousands of sci fi fans for his role as “Mr Colchester – terminator in a cardigan”- the leader of the Torchwood team, in the Big Finish ‘Torchwood’ audio dramas.

He recently filmed “Danny Boy” for the BBC

He is the author of “So You Want to Be a Corporate Actor?” and “The Working Actor” and is a regular columnist and feature writer for The Stage.

He is patron of the children’s literacy charity Grimm and Co (www.grimmandco.co.uk) based in Yorkshire for whom he has staged young authors live dramas and facilitated six independent films written by 9 – 11 year olds.

His first novel “The Punishment” met with great reviews when it was published in 2019.

*Terms and Conditions –UK entries welcome.  Please enter using the Rafflecopter box below.  The winner will be selected at random via Rafflecopter from all valid entries and will be notified by Twitter and/or email. If no response is received within 7 days then Rachel’s Random Resources reserves the right to select an alternative winner. Open to all entrants aged 18 or over.  Any personal data given as part of the competition entry is used for this purpose only and will not be shared with third parties, with the exception of the winners’ information. This will passed to the giveaway organiser and used only for fulfilment of the prize, after which time Rachel’s Random Resources will delete the data.  I am not responsible for despatch or delivery of the prize.