Janet’s first love arrives out of the blue after forty years. Those were simpler times for them both. Sunny childhood beach holidays, fish and chips and big copper pennies clunking into one armed bandits.

The Wells family has run the Cromer Pier Summertime Special Show for generations. But it’s now 2009 and the recession is biting hard. Owner Janet Wells and daughter Karen are facing an uncertain future. The show must go on, and Janet gambles on a fading talent show star. But both the star and the other cast members have their demons. This is a story of love, loyalty and luvvies. The road to Cromer Pier might be the end of their careers, or it might just be a new beginning.

Generally I’m a morning person, so I’ll go to my writing shed, which is more like a summerhouse in my garden, looking out over a big field. The shed has pictures of places I’ve been and things I’ve done. For example I have a picture of the Song For Hull 2017 concert I founded, showing a little girl on stage waving to her mum. It brings back the best of an emotional night.

I wouldn’t call it a ritual. I like to work to a written down story board type plot, particularly with plays. I most probably start with eight boxes (two acts x four scenes) and try to scribble in ideas and random thoughts as to what and who might feature. For novels I then extend and extend it again until I have a novel. Sounds easy but trust me it isn’t. I don’t plan to be a prolific writer, I just want to tell a story the right way, to make you laugh or cry, hopefully both!

No. I might take a mug of tea out with me, but no food. I write in silence too. If I’m on a roll then time disappears and I ‘wake up’ an hour later.

Wow. That’s really very tricky. My wife says I don’t read enough, and she’s right of course. I’d just rather be writing something, be it a play, pantomime or novel.

The book which really absorbed me, and fits the genre I’m most comfortable with, would be Jeffrey Archer’s Kane and Abel. A really absorbing family saga with lots of twists and turns. His later stuff is awfully formulaic, but I loved Kane and Abel.

I don’t try to write genre’s, I just want to tell stories about believable human beings, displaying all of the range of human emotions of which we are capable. Whatever genre it winds up in is okay by me!

Yes. But not that often. It sometimes helps to hold the description and character of someone in your mind, so as to remain consistent. By way of example the character of Welsh soprano Lauren Evans in The Road to Cromer Pier is based on a friend of mine from my home Amdram group who is very Welsh and has a stunning voice.

No, but I’ve pretty much always got my Samsung tablet to hand. I wrote one chapter of The Road to Cromer Pier on a plane without access to Word, so I used the memo pad and wrote a whole chapter. I can’t force things, words come when they will and I don’t set myself deadlines.

I don’t get science fiction at all, but my wife loves it! To be honest I prefer biographies to fiction. I really enjoy reading different perspectives of recent events.

I think I’d go for the late Arthur Hailey if I could. His books were so well researched and his characters so believable. His books NEVER set up a sequel either, something that really annoys me. If I could go for a screenplay I’d choose Aaron Sorkin who wrote the West Wing, probably the best TV series to come out of the USA.

I think it would have to be Italy. I finished one pantomime when I was in an apartment overlooking Lake Como, and Pen Pals features a love affair which started in Florence. We’ve been to Tuscany, Rome, Venice and the Amalfi coast, and plan to go to Sicily next year….. I wonder…..

I simply love the history, the scenery, the food, the wine…..

I am a 61 year old Accountant who semi-retired to explore my love of creative writing. In my career I held Board level jobs for over twenty five years, in private, public and third sector organisations. I was born in Coventry, a city then dominated by the car industry and high volume manufacturing. Jaguar, Triumph, Talbot, Rolls Royce, Courtaulds, Massey Ferguson were the major employers, to name but a few.

When I was nine year’s old I told my long suffering mother that as I liked English composition and drama I was going to be a Playwright. She told me that I should work hard at school and get a proper job. She was right of course.

I started as an Office Junior at Jaguar in 1973 at eleven pounds sixty four a week. I thus grew up in the strike torn, class divided seventies. My first career ended in 2015, when I semi retired as Director of Corporate services at Humberside Probation. My second career, as a Non Executive Director, is great as it has allowed me free time to travel and indulge my passion for writing, both in novels and for theatre.

The opportunity to rekindle my interest in writing came in 2009, when I wrote my first pantomime, Cinderella, for my home group, the Walkington Pantomime Players. I have now written eight. I love theatre, particularly musical theatre, and completed the Hull Truck Theatre Playwrite course in 2010. My first play, a comedy called He’s Behind You, had its first highly successful showing in January 2016, so I intend to move forward in all three creative areas.

Pen Pals was my first novel, but a second, The Road to Cromer Pier, will be released in the Summer of 2019.

I’m an old fashioned writer I guess. I want you to laugh and to cry. I want you to believe in my characters, and feel that my stories have a beginning, a middle, and a satisfactory ending. 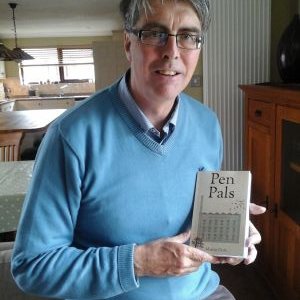