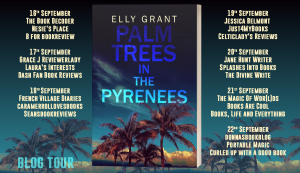 A rookie cop, a dash of mysterious death, and a heap of suspicion – as the heat rises, lethal tensions boil over in the Pyrenees.

Unappreciated, unnoticed, and passed over for promotion, thirty-year-old Danielle’s fledgling career in law enforcement is going nowhere – until the unexpected death of a hated Englishman turns her small town upside down.

Set in the idyllic south of France, Palm Trees in the Pyrenees is the first whodunit novel in Elly Grant’s thrilling murder mystery series. Against a background of prejudice, jealousy, and greed, Danielle pieces together the sparse clues of a fractured homicide. But will she find enough evidence to solve the case – and get the recognition she deserves? 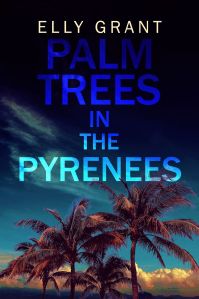 I like quiet, and solitude, with no interruptions, when I write, so I tend to write in the middle of the night. I’m usually awake and ready to start between 3am and 4am. The books which are set in the U.K. are written in my home office in Glasgow. The series of books set in France are mostly written in my little French house in the Eastern Pyrenees.

Once I begin a novel, I write something every day, never missing a day, even if it’s just one sentence. I believe writing must be treated like any other task and requires discipline and structure. Normally, I write between 1,000 and 2,000 words a day.

I always keep a glass of tap water beside me when I write, nothing more.

My favourite book of all time was written as a short story initially. The book is ‘Psycho’ by Robert Bloch. I read it as a teenager. I found it to be wonderfully creepy then – and I still do!

My first independent reviewer was a retired journalist. She was very tough on me. She said that with diligent research, a writer should be able to produce an acceptable piece of work in any genre. She set me the task of writing outwith my comfort zone. The outcome of this is my novella ‘Never, Ever Leave Me,’ a romance, which I really enjoyed writing. However, murder will always be my first choice.

I abhor bad manners and get annoyed when I witness injustice. Consequently, the people who upset me tend to become the inspiration for my victims. However, I never write specifically about people I know. Occasionally, I may use a turn of phrase or witty remark an acquaintance has said. Descriptions are sometimes based on a person I’ve seen in a shop or on the street. Sometimes I find myself staring at strangers who interest me. This often draws quizzical looks.

When I’m writing, I always keep a pen and paper on my bedside table because it’s usually just before I nod off to sleep when ideas pop into my head. As for having a notebook in my handbag or pocket, I wish I were so well organised. Usually, I find myself scribbling on the back of an old receipt or bus ticket.

I’ll read just about anything that is well written and holds my attention. However, I’m less inclined to choose sci-fi or fantasy.

I have already co-written a black comedy with my sister Angi Fox. It is called ‘But Billy Can’t Fly’ and will shortly be published. My husband, Zach Abrams, is also a published author and we are working on a collaboration at present. Once again this will be a crime novel, just so long as we don’t want to kill each other before it’s complete!

My ‘Death in the Pyrenees’ series of six books are set in a small spa town in France. I visited the region many times and fell in love with it. Indeed, this series was mostly written there. I would always travel to a country where I am basing a book. I believe you must live in a region for a while to fully understand the feel of the place, and to be able to accurately describe local places, people and situations.

Hi, my name is Elly Grant and I like to kill people. I use a variety of methods. Some I drop from a great height, others I drown, but I’ve nothing against suffocation, poisoning or simply battering a person to death. As long as it grabs my reader’s attention, I’m satisfied.

As I live much of the year in a small French town in the Eastern Pyrenees, I get inspiration from the way of life and the colourful characters I come across. I don’t have to search very hard to find things to write about and living in the most prolific wine producing region in France makes the task so much more delightful.

When I first arrived in this region I was lulled by the gentle pace of life, the friendliness of the people and the simple charm of the place. But dig below the surface and, like people and places the world over, the truth begins to emerge. Petty squabbles, prejudice, jealousy and greed are all there waiting to be discovered. Oh, and what joy in that discovery. So, as I sit in a café, or stroll by the riverside, or walk high into the mountains in the sunshine, I greet everyone I meet with a smile and a ‘Bonjour’ and, being a friendly place, they return the greeting. I people-watch as I sip my wine or when I go to buy my baguette. I discover quirkiness and quaintness around every corner. I try to imagine whether the subjects of my scrutiny are nice or nasty and, once I’ve decided, some of those unsuspecting people, a very select few, I kill.

Perhaps you will visit my town one day. Perhaps you will sit near me in a café or return my smile as I walk past you in the street. Perhaps you will hold my interest for a while, and maybe, just maybe, you will be my next victim. But don’t concern yourself too much, because, at least for the time being, I always manage to confine my murderous ways to paper.

Read books from the ‘Death in the Pyrenees’ series, enter my small French town and meet some of the people who live there —– and die there.

Alternatively read about life on some of the hardened streets of Glasgow or for something different try my other books and short stories.