In 1871, Lillian Nolan accepts a small role in Macbeth, and finally fulfills her dream of becoming an actress. That is until the renowned, but venomous, female star of the production is murdered onstage opening night. When her enraged spirit haunts the theater, Lillian is shocked to discover she can communicate with her. Offered a Faustian bargain in which she will be given talent and expertise way beyond her ability in exchange for uncovering the killer, Lillian can’t resist.

Her quest for the truth causes her to descend into the Underworld, the den of inequity below the streets of Chicago. What Lillian finds soon embroils her in a battle between her passion for performing and control over her own body as it all plays out in a supernatural game of good and evil.

Tagline: Life upon the wicked stage can be deadly.

Set against the backdrop of the Gilded Age, the Backstage Mystery Series stars Lillian Nolan, an unconventional member of Chicago’s upper class who dreams of a career of fortune and fame in the theater. Talented and ambitious, she possesses a hidden skill which she is extremely reluctant to use—the ability to communicate with those who have died and now live in the world of “The Beyond.”

The series chronicles her adventures in which she continually becomes enmeshed in solving mysteries which often require her accessing the realm of the paranormal. Filled with an incredible cast of characters—factual, fictional, and sometimes non-physical—who either help or hinder her quest for the truth, the stories take place during a a period considered to be the golden age of both acting and spiritualism in America.

A part of me believes that I should make every attempt to train myself to write anywhere and at anytime because place doesn’t matter, time doesn’t matter – it’s only the writing that matters. In practice, that hasn’t worked out so well for me. There’s a small office in the corner of the house that I use and that is my designated writing space. When I’m “in the office” I know it’s time for me to get to work. Since it is easier for me to work in the early mornings when I’m alone and there are few distractions, I prefer to write in the same place at around the same time. I once saw a quote from a writer who said, “I only write when the muse shows up. Good thing she shows up at 9AM every morning.” I believe that if you show up on a regular basis, the muse does too.

Rather than ritual, I would say I have a process which I regularly follow with each book. Depending on where I am in the process of creating a work will dictate what I need to do. This routine helps me to keep on track. I also set deadlines with my editor and proofreader who are very busy and if I don’t meet those deadlines, getting on their calendars is difficult. For a writer, nothing causes you more to focus than having a deadline!

I never eat at the computer – it’s just too messy. I do usually have something to drink on my desk – not too close to the computer though. In the past, I spilled a beverage over my keyboard and I would prefer not to have that experience again! I gave up carbonated beverages about five years ago. Now I only drink water or tea (hot or iced). As a transplanted Midwesterner, I now live in the metro Atlanta area and drinking ice tea here is a requirement – although I’m not partial to “sweet tea” which many Southerners drink. I do, however, appreciate the caffeine content.

That is hard to say. I like so many books and am an avid reader. I do read a lot of mysteries – particularly anything that’s really well written. I recently saw a post on social media that was a quote from Charles Dickens: “It was the kind of March day where the sun shines hot and the wind blows cold, when it is summer in the light and winter in the shade.” I could certainly feel that. It is such a pleasure as a reader to read great writing. Really good books deserve to be read more than once.  But to answer your question, almost anything that is well written, that takes me into a worthy story, that transports me to another world so that I release the strictures of time and place is well worth my time and becomes a favourite.

It is my intention in the near future to turn a screenplay I wrote years ago into a novel. It deals with a famous villa in Herculaneum, after which, the Getty Museum in Malibu, California is modeled. The plot includes lost knowledge, a pair of lovers who are separated by time and space during the eruptions of Mt. Vesuvius, and a mysterious mosaic. Although based on historical events, it would blend the occult, science fiction and mystery. I’ve always been intrigued by the idea and know it would be a real challenge to translate it into book form.

I think all writers do that – not exclusively – but you do take behaviors of people you know and then expand or twist them in some way to create a character. In A Walking Shadow, the character of the stage manager is exceptionally superstitious. I have known people in the theater who take that very seriously. I’ve also known actors who possess some of the personality traits I used – I just made them a little more dramatic – or in some cases, toned them down! For the most part there is no one character who reflects any particular person that I’ve known, but rather is a blend of personality traits from people I’ve come into contact with and which I then embellish with my own imagination.

I can’t read true crime, or anything particularly gruesome. While I have a great deal of respect for the writers of psychological thrillers, that is a genre I find difficult to read. Anything that describes torture, serial killers or exceptional amounts of gore will not be found on my night table or bookshelf. Because of that, I also find horror difficult to read. I understand that some people find being scared very entertaining. I can honestly say that I am not one of them. That said, I do love Stephen King’s The Stand so there’s always an exception to the rule.

In the past I have had the experience of writing in partnership. For the most part it was a wonderful experience. But each partner was well known to me prior to agreeing to write together. I respect other writers’ talents and abilities. I know what the writing process entails and each writer approaches their work and the process of creation differently. Because of that I can’t think of anyone I’d like to co-write a book with – not because I can’t think of a name – but because I’d have to know that person first – as a person. I’d have to know if we thought alike, and if we could work together before I would commit to writing together. Writing, no matter what form, is a personal creative effort. It can be great to have someone to bounce ideas off who has a vested interest in the project. When either one of you has an idea that you can run with, it creates a momentum that is very exciting. However, there has to be respect and parity. If one person believes that they are providing more to the process than the other and what they are providing is superior, then you have opened yourself up to a world of trouble and resentment.

I would like to visit the Mayan ruins in the Yucatan peninsula. I have an idea for a book about a mysterious Mayan Codex that contains a prophecy. It starts during the spring equinox at the pyramid Temple of Kukulcan in Chichèn Itzá. On the day of the Spring and Autumn Equinox each year, the light of the sun hits the pyramid and forms the body of a snake in shadow moving down (or up) the side of the pyramid. I would love to actually see that. I would also like to see some of the other temple ruins and Cenotes in the Yucatan that have to do with my story. There is nothing like experience of being at a location where you want to set a story and have the opportunity to breathe it all in.

Elizabeth Ireland discovered her passion for theater early. After receiving undergraduate and graduate degrees in Theater, she accepted a teaching position in a vibrant performing arts department at a college in northern Illinois. For ten years, she taught, directed and ran front-of-house operations. American Theater History—particularly that of the 19th century—has always been of particular interest to her.

She has been a quarter-finalist and a semi-finalist for the Don and Gee Nicholl Fellowship in screenwriting sponsored by the Academy of Motion Picture Arts and Sciences. Two of her screenplays have been optioned, but remain unproduced. Her nonfiction work, Women of Vision: Ordinary Women, Extraordinary Lives, was published in 2008. Her work has also been published in a collection of paranormal short stories, Paramourtal: Tales of Undying Love and Loving the Undead. She lives in metro Atlanta with her ever-patient husband, and two quirky dachshunds. 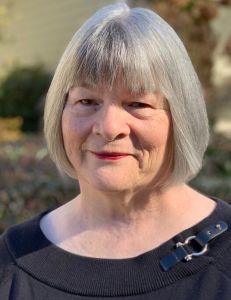