LAURIE STERNE feels like he’s been cut adrift in space. His father has been shot dead, caught in the crossfire of a gangland war that has also claimed his boss’s life. Laurie is a refugee who lost his adoptive mum years before and doesn’t know where he was born, let alone who his birth parents were. But he’s not alone in the world: someone is trying to kill him.

This is London, 2050, a dumping ground for climate refugees and dissidents. Gangs rule, murder goes unpunished and the police make sure you can’t escape.

In his struggle to stay alive, he finds an ally: his former boss’s secret daughter.
But with the killer predicting his every move, is the man without a past being betrayed by the woman who seems to offer him a future?

On a vine-shaded terrace overlooking a peaceful, unfeasibly blue Med. Well, in my dreams. The reality is an upstairs room in my house or the public library, which has fewer distractions and is better for total concentration.

Well there’s the ritual despair, terror and self-doubt – at least ten minutes devoted to each before starting my working day. Other than that, no. That may be my loss. Sometimes I write a sentence and it remains unchanged from first draft to final draft. More often I write a sentence, throw it out, try something else, and eventually get close to what I want and then rewrite it a thousand times. If there was a ritual that would up my chances of getting it right first time, I’d adopt it like a shot.

Some questions are difficult, some impossible. This is of the impossible variety – there are so many that have blown my mind. James Joyce’s Ulysses taught me to let go, Robert McKee’s Story taught me how to get a grip and Raymond Chandler taught me how to wrap it round the throat of the reader until you had their total submission. Here’s Chandler’s description of the flamboyant ex-con Moose Malloy from Farewell, My Lovely: ‘Even on Central Avenue, not the quietest dressed street in the world, he looked about as inconspicuous as a tarantula on a slice of angel food.’ Good enough to eat.

Never say never. I’ve written all sorts – plays, short stories, journalism, novels that might loosely be described as literary fiction. Right now, however, I’m completely wrapped up in the world of Laurie Sterne, my protagonist in The Black Ditch trilogy.

Sure. I worked on Fleet Street, where boozers, bullies, the beautifully bonkers and the straightforwardly barking mad paraded their quirks. People like that imprint themselves on your consciousness in a way that makes it impossible not to use them as base material.

I should do. Because that’s what ideas do – pop up in the most unlikely places and circumstances. Recently, for instance, in the middle of a gig. I jot them down on my phone because that’s what I have on me, but in a notebook they would less likely get lost in a forest of urgent texts, emails and so on.

Horror. I prefer my villains to be defeatable, at least in theory. If you’re up against the supernatural you’re stuffed.

Back in the 80s I worked on a short-lived weekly news mag called Picture Mirror. The editor was Keith Waterhouse – a great writer, hugely professional and a lot of fun to hang out with. Also, to collaborate with the 1950s science fiction novelist John Wyndham would be amazing – I could learn so much from him. Disadvantage: neither Waterhouse nor Wyndham are with us anymore. Advantage: a dead person isn’t going to tell you that your contribution is complete and utter dross.

Syria comes to mind. And for the reason, you will have to wait until I finish The Death Academy, Book Two of the Laurie Sterne trilogy. Sorry. I did go to Zimbabwe once to research a novel, which I then didn’t write. What a fail. I should go back there because more than anywhere I’ve ever been, I felt a strange connection to an ancient human past buried in the soil of the place. Imagine: just beneath your feet, rich seams of story just waiting for someone to come across them.

Simon J Lancaster is the author of The Black Ditch, the first in the Laurie Sterne trilogy of dystopian future thrillers. Prior to writing novels he was a national newspaper journalist in London, as well as a music critic and private pilot. He has written short stories and plays and, after reading extensively about climate change, concluded that the fantasy gun-play of contemporary-set action novels would be the lived experience of our coming world. 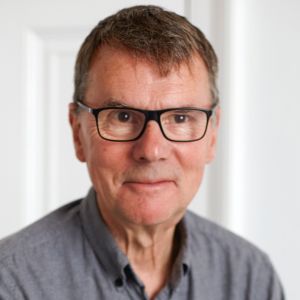