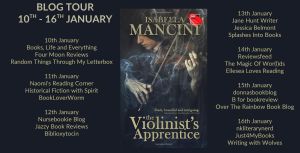 A dark journey through time.

It’s on a group trip to Rome that something terrifying and mysterious happens, whirling musical Clementina back in time to 17th century Italy. Amidst court intrigue and creaking carriages, Rome becomes a chiaroscuro backdrop to her growing feelings for young violin-maker Antonio Stradivari. But soon he discovers that Clementina is not all she appears. She must surely be a witch.  How can she return to the 21st century again? Meanwhile, in an icy corner of the Arctic, a professor plots. 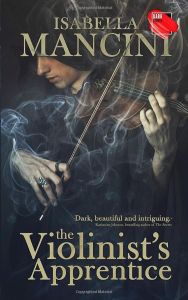 I’m very much a morning person. I prefer natural light so use our tiny conservatory to write as it has a glass roof. The morning light certainly helps my brain and imagination to keep ticking over.

Now I’m retired and living back in Birmingham, it’s nice to be able to write after breakfast, and watch my favourite 9 pm TV dramas in the evening.

Not really. I’m not a coffee drinker. After living in France for 12 years, I still follow the French regime of not eating between meals and, if thirsty, I drink black tea with lemon or sparkling water.

Difficult to choose just one, but probably my precious war-time edition of Forever Amber by Kathleen Winsor, given to me by my late father.

Well, over my writing career and under my different guises, I’ve already written under 5 genres: crime/historical/non-fiction/humour/timeslip – so, not many left!  I hope to write more of the latter.

Yes!  To facilitate the flow and characterisation, I tend to use the actual names of the people I’ve based them upon, only changing to fictitious names when I’ve reached the end.

I’d like to say yes, but in practice I’m not that efficient. Ideas tend to pop into my head at odd moments, which I try to remember.

In fantasy land, it would be with my all-time hero: Winston Churchill.

In my alter ego, Olga Swan, I started to chronicle the inadvertent humorous things which happened to us whilst living in France over 12 years. This was research on the hoof, recording events as they actually happened. Eventually it was accepted by Crooked Cat Books and became the international best-seller Pensioners in Paradis.

Isabella Mancini is the nom de plume of prolific author Olga Swan, published by Crooked Cat Books.  She has a BA Hons (Open) in English Language and Literature and a lifelong love for writing and language. For 12 years she lived in SW France, but returned to the UK in 2017, where she now lives in the West Midlands with her husband and elderly French rescue dog Bruno.

An Englishwoman in America

From Paradis to Perdition 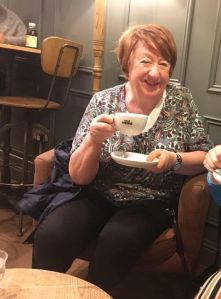