Jay-Jay the Supersonic Bus is not an ordinary bus taking you on a journey. He is a Playbus. Find out what happens when he is invited to an island where the children have never seen a double-decker bus – and certainly not one full of toys!

‘Jay-Jay and his Island Adventure’, was originally written for a Scottish book bus.

‘Play,Talk, Read’ was the project which visited remote areas if Scotland to encourage reading in the very young. It was a great success and the bus even visited the Shetland Islands travelling on a very small ferry.

The children had never seen a double-decker on their island before and certainly not one to play on.

However, the Scottish project was too busy with referendums and with the book ready and edited I changed the name of the bus from Benji, sending Jay-Jay instead.

The island on the cover of the book was based on a piece of mainland Spain which I have visited many times.

Cap D’Or is the promentory near to a little village of Moraira.

The villagers in Moraira invited me to read this book in their library and local schools.

The people in this little village were surprised to find that Jay-Jay was a real bus.

(Jay-Jay may not have got to Spain in reality but in my imagination he did and now all of the books are in the local library in both Teulada and Moraira.) 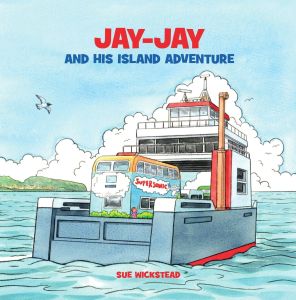 Yes. When I was little, I loved reading Comic magazines. One of the things I remember was that at the school fair there were rolled up bundles of comics you could buy (for a penny). The comics were also in the classes for wet play days. I loved reading comics like ‘The Beano’ which my mum wouldn’t let me buy.

My favourites were probably, Bunty and Jackie.

I also loved ‘Peanuts’ or indeed any cartoon comic strip in papers and magazines. I liked the visual humour.

I also read a few comic strip stories including Lord of the Rings.

My daughter is a comic book reader and has a lot of the DC and Marvel comics which I have looked at too.

One of my aunts would always bring along a book to read to us as children and I loved listening to stories. I especially loved fairy stories, witches and ghost stories.

Another aunt was a great storyteller as she had lived and taught in Sweden and Africa. So, I suppose my love of reading began by my love of listening to stories.

I loved the illustrations in a book. I think reading begins with looking and the visual clues.

(Something missing in schools sometimes)

This question really made me giggle as … hmm… I could think of a few.

But no. I haven’t had any murder in my children’s stories yet published.

I did write a pirate story (not published) in which some horrible people were named as the baddies. (This did make me feel better!)

But, maybe, it would be too good, to put those who I would love nasty things to happen to, appear in my stories.

I left a school due to bullying by my head and although others who were also bullied hate her with a vengeance, I pity her.

My hope is, ‘What goes around, comes around’ but in all honesty I don’t think this is in fact real. It would be nice to think so.

In fact, my head-teacher was very vision-ed and focussed but did not empathise with the staff. For her education was a business to organise. The sad state of education, I think. She did not have a family as such and had a few problems in her life and maybe this is her comeuppance?

Either way I haven’t the time to put her in a book. But hey, if one day a bus does run someone over, I guess it could be her?

The naming of the bus was initially difficult (as it is an inanimate object personified) but the name came from its number plate JJK (hence Jay-Jay).

Daisy was down to the daisies painted on the outside.

Human characters are from names and people I may know.

The buses are real buses. It might be harder trying to name some of the bus books to follow.

Poetry. When I was at college and many years ago, I used to write poetry.

Planning in school used to be a day book recalling and planning next steps. Also writing about the children which helped me to be able to write about them in their reports.

Diary I always wrote down a diary or recount of events, it helped get things out of my system and to recall.

I recounted the events and things happening in school;

I wrote a daily diary of the troublesome time involved when I moved house. (it was a nightmare!)

I would also write a diary when on holiday, usually a boring account but it has certainly turned into a tradition. (I have several holiday diaries)

Teacher Diary. More recently I began to write a diary of my school visits, because as I am a supply teacher, I visit a lot of different schools every year. Spooky coincidences and events were occurring and I began writing them in a blog for my web site and now recall each day’s events, school and children in the book this is great as I have been able to refer back and remind myself of the school.

Game. I wrote and created a board game called ‘Satisfactory’ or ‘Who killed the OFSTED Inspector?’ (Spot a theme here?) I had each teacher with their secret weapon, mine was a rain-stick, we were able to play in school as a staff team one staff meeting, it was very cathartic!

I suppose the bus stories might end up like ‘Thomas the Tank engine’ with googly eyes, which is what I did not want and why I went the self-publishing route. I then had ownership and direction for the illustrations.

I would be pleased if someone felt there was a story they could adapt.

Hard one! I would love to be interviewed by…? (anyone!)

I was part of ‘National Playbus Association’, which was the mobile charity which supported bus projects. I gathered a lot of photographs and information but at the moment my stories are quite simple and from experience and knowledge.

The only dilemma at the moment is getting the funds to produce and pay for the books as well as the marketing and selling.

I have lots of ideas and stories in various stages of development but like my bus, the journey is slow and bumpy.

I would like to write a longer story one day but the buses are all lined up and waiting. (LOL)

What is more important to you: a rating in stars with no comments or a reviewer who explains what the comments they give are based on (without spoilers of course)

I love the stars of course especially the 5 stars but, in all honesty, I prefer to read the comments and opinions. I have been lucky in that most people love my stories and their opinions and comments have been great.

Not really had any negative comments but perhaps these are harder to take as you take them personally and perhaps remember them the most.

There are ways of being able to criticise and comment without being destructive but you also have to take on board criticism. Hopefully I have implemented criticism before I have the finished piece.

My children criticise me writing not because they don’t like it but because they know selling books is not a money spinner (well not children’s) and they think I should not be worrying about books but retired and enjoying life.

I would be bored.

(But I love what I do, just have a few doubts sometimes… don’t we all?)

I am a teacher and an author and have currently written six children’s picture books with a bus theme.

For over 20 years, alongside my teaching career, I worked with a Children’s Charity, The Bewbush Playbus Association, which led me to write a photographic history book about it.

I soon found that many children had never been on a bus before, let alone a ‘Playbus’ and they wanted to know more. I decided to write a fictional tale about the bus, his number plate JJK261 gave him his name.

‘Jay-Jay the Supersonic Bus,’ came out in print in 2014. It is the story behind the original bus and is his journey from a scrap-yard to being changed into a playbus for children to play in. From Fact to fiction the bus journey continued.

This story has now been followed by five more picture books.

I also undertake events and author bookings and love to share the story. There are also a few more stories in the writing process, with links to real events and buses.

The story has been read in many schools in the south-East of England, where I teach as a cover teacher, it is always well received and certainly different.

http://bit.ly/2BZiews – Teacher in the cupboard 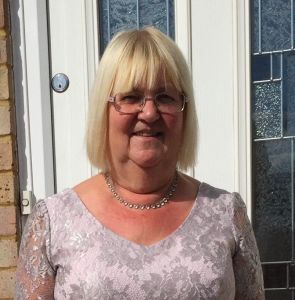