The house was silent, sunlight flooding through the window. The body of a beautiful red-headed girl lay on the floor. She looked asleep, but for a ribbon of blood across her neck…

Melissa Craig is just settling into a new teaching job when she is shocked to hear the news that Angelica, her beautiful colleague, has been found dead in her home, her throat cut.

As the police investigation begins, everyone in Angelica’s life comes under suspicion, but Melissa wants to do some digging of her own, especially since she’s romantically entangled with one of the chief suspects.

Was it the victim’s spurned fiancé, her secretive landlord or the snobbish head of department with a roving eye?

As she looks for clues, Melissa start to wonder if the key to the crime lies in a vandalised portrait of Angelica that was slashed at the neck in exactly the same way as her dead body.

Just when Melissa thinks she’s got her man, a second body surfaces, and she knows she needs to catch the culprit before more innocent lives are taken. Can Melissa uncover the truth before the killer strikes again? 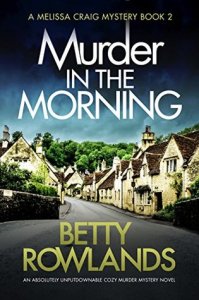 I have read the first book as well and although I liked it, I liked the second one better.
They both are fluently written and easy to follow, but the story in this one attracted me more.

It’s nice to go back to Melissa, her neighbour Iris and all the other villagers and how they deal with or gossip about what is going on. And what is life without a little love?

This series is perfect for fans of cozy mysteries.

Betty Rowlands burst on to the crime scene by winning the Sunday Express / Veuve Clicquot Crime Short Story of the Year Competition. Her success continued with her nine highly acclaimed Melissa Craig mysteries. She is an active member of the Crime Writers’ Association and regularly gives talks and readings and serves on panels in crime writing conventions.