The girl is sitting upright, her dark brown hair arranged over her shoulders and her blue, blue eyes staring into the distance. She looks almost peaceful. But her gaze is vacant, and her skin is cold…When Detective Jackie Cooke is called to the murder scene, she is shocked by what she sees. Missing teenager Chloe Smedley has finally been found – her body left in a cold back yard, carefully posed with her bright blue eyes still open. Jackie lays a protective hand on the baby in her belly, and vows to find the brutal monster who stole Chloe’s future.When Jackie breaks the news to Chloe’s heartbroken mother, she understands the woman’s cries only too well. Her own brother went missing as a child, the case never solved. Determined to get justice for Chloe and her family, Jackie sets to work, finding footage of the girl waving at someone the day she disappeared. Did Chloe know her killer?But then a second body is found on the side of a busy motorway, lit up by passing cars. The only link with Chloe is the disturbing way the victim has been posed, and Jackie is convinced she is searching for a dangerous predator. Someone has been hunting missing and vulnerable people for decades, and only Jackie seems to see that they were never lost. They were taken.Jackie’s boss refuses to believe a serial killer is on the loose and threatens to take her off the case. But then Jackie returns home to find a brightly coloured bracelet on her kitchen counter and her blood turns cold. It’s the same one her brother was wearing when he vanished. Could his disappearance be connected to the murders? Jackie will stop at nothing to catch her killer… unless he finds her first…

A new series,  a new police team and a (to me) new author to meet. I always love that. It’s a bit like the first day in a new school. Who are these people? Will they soon become familiar faces or will I not want to see them again at all? What makes them tick? What kind of writing style has the author? Is the storytelling something that will attract me or is it rather a one trick pony for me?

I find all this very existing and I always start with an open mind. That’s the fair thing to do, right?

I can honestly say this book ticked all the boxes and it came out with straight A’s on every level.

It was filled with emotions and suspense, but it was also dealing with a seriously disturbed and evil killer.

Jackson (Jackie) has a lot to deal with at home in her private life too. Some would think this would distract her and make her focus on the wrong things. I find the opposite is true. I had the feeling it made her even more determined and she was like a dog with a bone. Even if she was putting something precious at risk, she had to push through, but she had a very good reason for that too. She was caught between a rock and a hard place, but she would fight with all she has.

This story also has a money-makes-the-world-go-round message. It’s a simple basic in economics: when there are no buyers, there don’t have to be sellers and buyers are the cowards driving the sellers often to do what they do… Aren’t they as much to blame…?

I was captivated and disgusted by this story. 5 stars

Thank you, Marnie Riches and Bookouture

Marnie Riches grew up on a rough estate in north Manchester. Exchanging the spires of nearby Strangeways prison for those of Cambridge University, she gained a Masters in German & Dutch. She has been a punk, a trainee rock star, a pretend artist and professional fundraiser.

Her best-selling, award-winning George McKenzie crime thrillers were inspired by her own time spent in The Netherlands. Dubbed the Martina Cole of the North, she has also authored a series about Manchester’s notorious gangland as well as two books in a mini-series featuring quirky northern PI Bev Saunders.

Detective Jackson Cooke is Marnie’s latest heroine to root for, as she hunts down one of the most brutal killers the north west has ever seen at devastating personal cost.

When she isn’t writing gritty, twisty crime thrillers, Marnie also regularly appears on BBC Radio Manchester, commenting on social media trends and discussing the world of crime fiction. She is a Royal Literary Fund Fellow at Salford University’s Doctoral School and a tutor for the Faber Novel Writing Course. 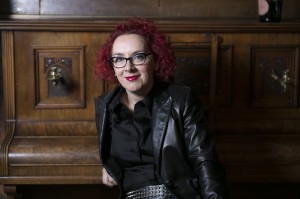