“Fate hunts us down in our sleep.” Clay Conover, retired Marine officer turned corporate trainer has successfully re-careered and has a long-term plan. A plan grounded in a sense of duty, loyalty, and tempered by clear-eyed realism. Unfortunately, Clay’s plan doesn’t account for the hiring of Sheera Prasad. Young, hungry and ambitious, Sheera has an agenda of her own.

In the collision of wills that follows, Clay is confronted with a choice that will define him, not simply professionally but personally. Will he take the ethical high road, or opt for self-serving rathionalization? West of Tomorrow is an intelligent romance, laced with corporate intrigue, betrayal and the undiscovered phoenix living in all of us. 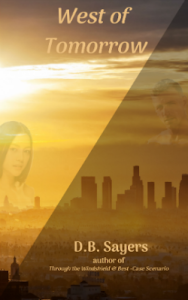 Clay Conover and Sheera Prasad inch closer to caving into their mutual desire for each other.

“Good morning yourself.” Clay heard the hinges to Alistair’s office door creak as he opened it.

Shit, he thought. He’d forgotten the WD-40 he’d promised. Clay pulled out his planner and was scribbling a note in it when Sheera walked in.

“Good morning, Clay.” She walked between their desks and set purse and laptop bag on the return of her desk. “Do anything special for Thanksgiving?”

“Had my daughter and her boyfriend over for dinner. Instead of turkey we had ham and twice-baked potatoes. After dinner we watched the Packers pound the Lions.”

Sheera inspected him like she’d discovered a new specie. “You don’t strike me as the football type.”

“Hard to grow up in the Midwest without developing at least a passing interest,” Clay replied. “What about you? What’d you do for Thanksgiving?”

“Slept in for starters. Then Nan had Neill over for turkey. He brought three bottles of wine and a couple movies to watch. I fell asleep half-way through the first one. When I woke up, the TV was off, and I could hear them at it in Nan’s bedroom. So I retreated to the guest room, put on a pair of headphones and played dumb in the morning.”

Sheera flashed him a self-satisfied smile. “I’m an incredibly considerate girl. Besides, Nan is so overdue.”

“You knew her from college, I think you told me?”

She nodded. “Sorority sisters and roommates most of the time.” Sheera turned back to her desk, pulled her laptop from its bag and docked it, knocking a pen off the desk. She leaned over to retrieve it, giving Clay an opportunity to enjoy her skirt climbing high up her thigh.

Does she do that intentionally? he wondered. Not that I mind… “How are you coming on the scenario adaptation?” he asked.

Sheera looked up at him, still straining to reach the pen on the floor, her hem climbing even higher. “To be honest, I haven’t worked on it since we talked about it with Alistair, the other day. It’s been on my mind, but…” She captured the pen and straightened up. “I need to get cracking, don’t I? Especially in light of Alistair’s warning.” She frowned. “My bad. I’ll get on it today.”

Napali’s oozed atmosphere more appropriate to a date than a business lunch with a partner. Sheera decided to tease. “You and Alistair come here often?” she asked after a tall blond seated them. She glanced at the menu then eyed him mischievously over the top of the menu.

She smiled. “Well! Don’t you know how to make a girl feel special?”

“You’ve earned it,” Clay told her. “I’ve been riding you pretty hard—”

“Have you really? Oh, right…the project.”

“You know exactly what I mean.”

“Do I?” Sheera’s eyes glowed with amusement. Clay looked down and she relented. “You’re right I do.” Clay’s eyes came up to meet hers.

“Okay. What can I get you?” A waitress in an immaculate maroon dress and spotless white apron stood next to her, pen poised over her order pad.

“I’ll have the Coast Salad, without macadamia nuts,” Sheera told her. “And iced tea.”

“Make that two,” Clay seconded, “but I’ll take the macadamias.”

“Perfect.” She scribbled and left.

“You said something this morning about growing up in the Midwest,” Sheera noted. “Nan, my best friend grew up in Chicago. What about you?”

“Very,” Clay affirmed. “At least back then. Not many distractions, either, which was good for my academics.”

“I can imagine,” Sheera retorted. “What else could you do? Watch the corn grow?”

“It wasn’t that bad. I grew up in a college town, swam competitively and was a lifeguard three evenings a week and every weekend. Add in homework and chores at home, it kept me out of trouble.”

“Ames. Iowa State University is there.”

“And your family…are they still there?”

“Hartford. My father taught Business Administration at UConn Hartford.” She frowned. “Growing up, it felt like they brought India along with them.”

“Isn’t that natural? Clay asked. “Even as we evolve, don’t we still crave the familiar?”

“I suppose…and don’t misunderstand me. I’m proud of my heritage, but I wanted to grow up American.” She shook her head. “Baba wanted me to grow up a proper Indian girl who just happened to live in America.”

“So you pushed back.”

“No, but I sense…what…an interest in self-determination?”

Sheera felt herself go a little buttery. “Perceptive…and kindly put.” She shrugged. “Neighbors would probably have used rebellious to describe me. By the time I got to high school, we fought pretty much every day about something.” She chortled. “More like everything. Hemlines, dating, curfews, etc, were common themes, and to be honest, I enjoyed getting him riled up, after a while. Which is why I went away to college.”

“Yeah well, Baba didn’t. When I came back for Spring Break my freshman year, my father had arranged for a transfer to UConn.” Sheera shook her head. “My mother handed me the application almost before I set my suitcase down in the hall.”

“Here we go…” The waitress plunked down their salads and refilled the iced tea. “Anything else?” she asked.

Clay shook his head and she vanished.

Sheera picked up her fork and stabbed aggressively at her salad. “Even though he used Mother as a messenger, I knew Baba was behind it and it pissed me off.”

“We fought about it every day for a week, but he wasn’t budging.” Sheera’s lips twitched mischievously. “So I pretended to cave. I filled out the application and gave it back to Mother to mail. After Baba left that morning for the school, I snatched the application from the mail box.”

Sheera harpooned another clump of salad. “When I got back to Northwestern the next semester, I checked into work-study and scholarship grants.

“I managed to cobble together a couple grants and a job to supplement them. When I went home after my freshman year, I played dumb until Baba wondered when we were going to hear from UConn. I kept saying, ‘any day now, any day now.’”

“The shit hit the proverbial fan. He said things to me I knew he didn’t mean, but it still pissed me off. I went to my room and stayed there. When Baba left the next day, I packed, emptied my bank account and headed for Nan’s. Her folks let me flop there until school started.”

Clay shook his head. “And how long did it take before he tracked you down.”

Sheera laughed, soundlessly. “Good guess. Took less than a week. I should have known, in retrospect.”

“Nan’s father came home to our shouting match in the entryway to Nan’s place. Baba turned to him and demanded he ‘uninvite’ me.” She shook her head. “You’d have to know Harmon Telchik to know how that landed.”

“Politely but firmly. And then unbeknownst to me, made a few calls to Northwestern and got me a really killer internship. And by the end of the year, I had a full scholarship to boot.

“Nan’s Mom, whom I just adore, helped Baba patch things up with me and the Telchiks became like a second family.”

“Quite a story. Thanks for sharing.” Clay looked at his watch. “We should probably head back.”

“Yeah. I’m a long way from finished with that damned scenario.”

Clay drove back to the office in a silence Sheera didn’t break. But Clay’s eyes were eloquent. She could feel them, every time she uncrossed or recrossed her legs, to the whisper of her nylons. His interest kindled a thrill of power mixed with arousal.

Did he know? Did he know she knew? Sheera couldn’t be certain, but something felt different between them. A palpable tension—physical and more. The drive back to the office was too long. And too short.

Dirk came within a cat’s whisker of never publishing. Through two frenetic professional careers first as a Marine officer and then as a corporate trainer, he started way more stories than he finished, until full retirement left him with the focused attention he needed. West of Tomorrow, his first novel draws on his experience with the military, corporate America and the unpredictable nature of life.

Since then, he has published Best-Case Scenario, Act I of Nyra’s Journey a New Adult romance, Through the Windshield, Drive-by Lives an anthology of short stories and Tier Zero, Vol. I of The Knolan Cycle. He currently lives in Laguna Niguel where he surfs,  snow skis in the winter and facilitates an author’s critique group.