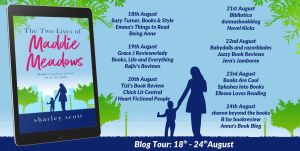 Maddie Meadows adores her family and loves her work. But she has good reason to keep them separate.

For single mum Maddie, home is a flat on a run-down estate. And family consists of an excitable toddler, a lonely Dad and a younger brother mired in a love triangle.

Meanwhile, professional Madeleine balances a tricky day job, made worse by a jealous colleague. No one at work knows about her other life, and she needs to keep it this way: one of the bosses has made his feelings very clear about single parents and the people on her estate.

Thank goodness for her fun-loving and loyal friends – although Maddie wishes they’d believe her when she insists she has no time for love. Or so she tells herself as she fights to quell her hidden feelings for her gorgeous colleague, Oliver, who comes from the posh part of town.

When her friends line up their ideal man for her – Sean, more beanstalk than Bean – Maddie wishes she’d told them the truth. It’s hard enough juggling two lives. But, with all the added complications, how long will be it be before Maddie’s carefully created world comes crashing down?

I have never read a graphic novel. Should I admit that?

Is it possible to have a genetic link as my mum is a voracious reader but she didn’t raise me or my siblings. Neither of my siblings is a keen reader – although my sister has started to read more in recent years – whereas I was known to go around people’s houses and search out books and magazines to read. Although my dad wasn’t a big reader, he was happy to take me to the library.

I haven’t done the author’s equivalent of a voodoo doll and killed off anyone or given them a terrible disease, but I do have the one character in this book who reminded me, in part, of an ex-colleague. He got his comeuppance with a payback that I wished had happened to the real-life person.

I’m not original with names. In fact, sometimes I find that all the characters’ names begin with just three letters of the alphabet and I have to go back and change their names. Once I had a character called Ben who I changed to Matt. I learned a lesson with search and replace when I edited this novel and came across a car driving round the Mattd. Search and replace is the enemy of many shortened names.

Do write other things beside books (and shopping lists 😉 )?

I’m a pantser – I don’t plan my novels – in every aspect of my life. My husband does the shopping list or else we’d have nothing for dinner (if I had eaten before shopping) or a crammed trolley full of goodies – but nothing we really needed – if I had gone to do the shopping with an empty stomach.

I used to write reports for work but the only writing I do now, apart from novels, is emails for the guesthouse.

A cheat but I’d love to interview my dad and ask all the questions that have come to mind since he died.

In terms of my books, it’s unlikely any of them would be made into a TV series but, if they were, I wouldn’t want The Two Lives of Maddie Meadows changed too much. The characters are too important to me. However, I’d be happy for the books in the Devon seaside guesthouse series to be adapted to suit the audience.

My ex-colleagues have been wonderful by giving their time to provide information on domestic violence, drugs (Maddie Meadows may be a gentle read but it lightly touches on the darker side of life). A friend has also given me general information on what it is like working in a unitary/borough council, as I haven’t worked in either of those.

For a thriller I wrote under another name, a friend put me in contact with an ex-policeman, which proved invaluable. Also, a colleague in the fire service asked one of the watches to check my first chapter during their tea break. I’d expected her to pass it to one person, so I was mortified to find a bunch of men critiquing it as I could imagine some of their comments.

I have a group of author friends who used to be on WriteWords, which was once a thriving writing community. They are helpful with general queries about writing and personal matters too. They are such a lovely and giving group.

What is more important to you : a rating in stars with no comments or a reviewer who explains what the comments they give are based on (without spoilers of course).

I’d prefer to know why a star rating was given as it’s helpful to know what was good about a book or not so good. But in doing so I might come to learn the adage ‘be careful what you wish for’. That saying has been the story of my life!

Her latest book ‘The Two Lives of Maddie Meadows’ is being published in early July 2020. The second in the series ‘The Gift of a Rose’ will be available in the autumn.

Sharley is a guesthouse owner in South Devon. She is thankful to have been blessed with lots of amazing and kind-hearted guests, who are nothing like some of the characters featured in the Devon Seaside Guesthouse series.

The Two Lives of Maddie Meadows is a fictional account, but Sharley has never forgotten how interesting life can be with a toddler. Some of the mischief Josh gets up to will be familiar to all parents. Sharley has carried out the threats she made to her son decades ago and now embarrasses him by telling tales to his girlfriend, although he gets her back by recounting stories about his mum.