They believe it is only about defeat and escape.

Little do they know; it is something more than that. It is about the rise of the dead and the world’s destruction.

Lost in the desert of Rajasthan, India, Rahul and Elisa learn the truth about a wicked wizard named Dansh and some enchanters performing resurrection rituals.

Though they try to stop him, Dansh knows black magic and they find him a challenging adversary. Even worse than him, Rahul and Elisa soon discover that the churel named Dali has returned. Soon, the King of the Underworld, an immortal rakshasa named Sekiada, will make his way to the earth with the force of his thousands of fallen angels to conquer the world.

Rahul and Elisa must find a way to stop them and save humanity.

Terror inflames the nation. The country’s best commando, Aarav Singh, and the best local police officer, Arjun Rawat, reach the city’s border near the desert with the force of gifted soldiers to commence battle against evil. They turn the border into a battlefield to prevent the demons from entering the city.

The apocalypse is struggling to reach its highest peak as the Asian evils slowly spread across the nation: churels, rakshasas, pishachas, daayans, shaitans, and many more hair-raising bloodshed lovers.

Rahul must find a way to murder the immortals: the wicked wizard, the king of the Underworld, and the strongest churel of all time, and Elisa must gather her own courage to battle the demons, especially one of the immortals, to prove women are not weak.

Welcome to the world of horror, where the characters play games of deceit and betrayal to achieve their goals, and the demons enjoy slaughtering the humans.

The end is near. Or it’s just the beginning!? Dare to witness the apocalypse, but only if you are comfortable with bloodbath and barbarity.

10 reasons you would like to read Boondocks: An Asian Evil Apocalyptic Thriller by Jaydeep Shah

1. If you love wizards, demons and witches, you will love this book. The book has a wizard antagonist who performs resurrection rituals to bring the strongest churel (the witch) of ancient era back to life. After her return, an immortal rakshasa (the demon), the king of the underworld makes his way to the earth with the force of his thousands of fallen angels to conquer the world. Overall, there are three great, powerful and immortal antagonists ready to bring the doom to end humanity.

2. If you are someone looking for strong female protagonist, this book is for you. The female protagonist named Elisa is bold, smart, and courageous. Indeed, you will see a character arc at some point where you may find her weak and scared. However, it is fun to see her raising her courage again to destroy her fear and battle the demons.

3. This book is still for those who prefers a male protagonist. Elisa’s boyfriend, Rahul, who is also a protagonist is someone who doesn’t trust people easily. He is someone who sometimes judges others from their appearance. He believes ghosts and black magic are real, and so he is scared all the time. However, the most interesting part is to see him changing over the course of the story as he finds the world is in danger.

“Boondocks is a thrilling book that will keep readers engrossed till its last page as necromancy, black magic, wizardry, spells and sorcery takes center stage––the world is not going to be the same anymore!” ★ ★ ★ ★ -ILoveUniqueBooks.com

5. Boondocks is set in Rajasthan, India. If you love the setting of the desert and the city, you will enjoy reading this story. Not only that, a lot of things in the world will be new to western audiences; that being said, if you like to learn about new culture, have an interest in Indian mythologies and folklores, this book is for you.

6. The story has a main theme of good vs. evil. So, if you are looking for a story where the good and evil battle to keep their existence, you would not like to miss this story.

“An epic apocalyptic thriller steeped in Indian folklore and black magic. Recommended for fantasy fans seeking a truly original, high-concept tale of good versus evil. Fans of Lord of the Rings-style epics will be right at home with Boondocks, and not just because there’s a clear demarcation between good and evil, as well as healthy doses of magic, fascinating supernatural creatures and fictional folklore. For Western audiences, everything about the novel will be new – the food, the language, the flavor and culture references both real and invented. That, plus Shah’s occasional references to modern-day brands such as Instagram and Dunkin Donuts, create a concept that successfully blends classic and contemporary into something truly fresh.” ★ ★ ★ ★ ★ -BestThrillers.com

7. The world is also exciting. The story of Boondocks starts in ordinary world. Yet, as the story progresses, the demons return to the earth, the world gets exciting. Boondocks is a nice start to the apocalypse world with the rise of Asian evils. To get more fun out of it, it will be a good idea to read its sequel, Havoc, set to release in January 2023, as it comes with more demons in India and vampires in the U.S. The world will get even more intriguing in the third book, V Land, in which vampires will be center focused, and the fourth book, Z Russia, in which the characters will struggle to survive from zombies.

9. The characters can be your role model. Elisa shows courage. Rahul shows awareness. Banjeet and the villagers show love and respect for others. Arjun and Aarav are a great example of friendship.

10. Finally, it’s the best way to take a break from reality but live a reality in the world of fiction. As the world is very much real with some invented stuff of modern-time and some references to Indian mythologies and folklores, you can get a feel of both real and fiction at the same time.

Jaydeep Shah is an avid traveler and the author of gripping horror, thriller, and romance stories. As a bachelor’s degree holder in Creative Writing, he aims to entertain as many as people he can with his stories. He is best known for Tribulation, the first book in the “Cops Planet” series.

In addition to those books, The Shape-Shifting Serpents’ Choice, Jaydeep’s first young adult flash fiction written under his pen name, JD Shah, is published online by Scarlet Leaf Review in their July 2019 issue. Currently, he’s endeavoring to write a debut young adult fantasy novel while working on a sequel to his first apocalyptic thriller, Havoc.

When Shah is not writing, he reads books, tries new restaurants, and goes on adventures. 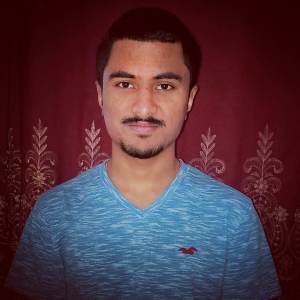