It’s going to be the best summer ever for ambitious, overachieving Quinn. A huge history buff, not only has she landed her dream job interning in the archives department of the local castle, but her best friend will be working there too.

However, Quinn isn’t the only one to be working in Archives this summer; Quinn’s academic rival, Patrick, is sharing her office in Muniments. They’re competing for the Letter of Recommendation (singular) from the research historian that Quinn needs to get her dream future placement.

Their emotionally-loaded and competitive rivalry turns into a reluctant friendship, as they spend every day working together in silence (and sharing the occasional Twix). Until the Re-Enactors arrive. Between Patrick and Harry – the Golden Knight of the jousting team – Quinn’s carefully planned summer is thrown into complete disarray. Meanwhile, her best friend’s relationship may look perfect on the outside, but Quinn is starting to realise that there’s more going on than there seems.

Although Quinn is determined and single minded about planning every detail of her sparkling future, she comes to discover that the best things in life are the spontaneous ones – and that some people are more important than any Letter of Recommendation (singular) could ever be. 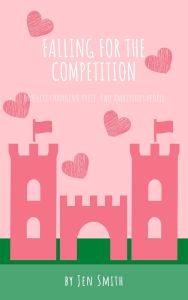 I don’t have a when and where, but I HAVE to write on my laptop. I can’t do it at my main (work) computer. And I love sprints. If I sit down and say, right, I’ve got two hours, I’ll just look through Twitter. If I’ve got 10 minutes, then brilliant, I’ll knock those words out.

No ritual, but I am a PLANNER. Character sheets, long synopsis, short synopsis, setting sheets, beat sheets. Love it ALL.

Much to the disappointment of  my husband, I consume waaaaay too much diet coke. But crisps, as the only major food group that matters, are my constant company.

There’s so many!! Tweet Cute by Emma Lord, The Secret History by Donna Tartt, The Scorpio Races by Maggie Steifvater and I recently fell in love with The Roommate by Rosie Danan.

I’m actually editing an adult romance fantasy at the moment. It’s a rewrite of something I wrote many years ago! Also, there’s an adult romance percolating in my mind, just dying to be planned and get out.

Perhaps little parts of them, little quirks, but people I know aren’t going to be reading Falling for the Competition thinking ‘good lord! That’s ME!’

I don’t – but I obsessively think about them over and over until ideas are imprinted on my mind and that’s all I can think about.

I’m not a big fan of Sci Fi or Space stuff, but I think I just haven’t read the right one yet!

Oh lord me, I’m not sure! I don’t know that anyone would want to write with me, with my planning and highlighting and red pen and obsessiveness!!

Well, of course, it would have to be the south of France, the Languedoc, for it’s hazy summer days, the beautiful castles and architecture, the heavy sense of doomed mystical history.

Although, of course, Catharism wasn’t ‘mystical’, but anyway, I’ll save that lecture for another time and space!

Jen lives in the Midlands with her husband and two children. With a Masters Degree in Medieval History, Jen loves castles and King John a little too much. Strangely un-British, she does not like tea, oranges or marzipan, but adores French cheese, guava juice and Chinese food (not together).

When not writing, Jen can often be found pointing out historical inaccuracies in period dramas, being a Lady that Lunches with close friends and playing board games with her family. Note: her handbags are always heavy due to multiple books (just in case she needs them).