On her twenty-first birthday, Isabela receives a secret letter with a cryptic poem. These documents from the long-deceased Lorenzo invite her to hunt for the gemstone. But first, she must decipher the poem’s eight stanzas for clues.

To assist, Isabela hires her thirteen-year-old neighbors, the four Botanic Hill Detectives—twins Lanny and Lexi Wyatt, and their best friends, Moki Kalani and Rani Kumar. Eerie footsteps inside the mansion, unexplained occurrences in the adjacent cemetery, and the mysterious tenant in the backyard casita challenge them. But they ingeniously make progress on the poem’s meaning with startling discoveries. Sliding wall panels, a secret room, and hidden passages reveal much. The detectives aren’t the only ones looking for the emerald. The perilous race for the de Cordoba treasure is on! 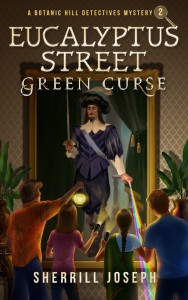 Sherrill Joseph will be forever inspired by her beautiful students in the San Diego public schools where she taught for thirty-five years before retiring and becoming a published author.

She has peopled and themed the Botanic Hill Detectives Mysteries with children and adult characters of various abilities, races, cultures, and interests. Sherrill strongly believes that children need to find not only themselves in books but others from different races and social situations if all are to become tolerant, anti-racist world citizens.

In addition, the author created her detectives—patterned after her own fifth-grade students and twelve-year-old twin cousins—to be mature, smart, polite role models that will appeal to parents, teachers, but especially to kids who seek to realize their greatest potential with courage and self-respect.

Sherrill is a lexical-gustatory synesthete and native San Diegan where she lives in a 1928 Spanish-style house in a historic neighborhood with her poodle-bichon mix, Jimmy Lambchop. Other loves include her daughter, son-in-law, and granddaughter. She can’t leave out dark chocolate, popcorn, old movies, purple, and daisies. Having never lived in a two-story house, she is naturally fascinated by staircases. Sherrill is a member of SCBWI and the Authors Guild and promises many more adventures with the squad to come.

Signed, personalized paperback copy of the book, and some matching book swag (x3)

Giveaway will close on October 23rd!

Other Books in the Series

Mrs. Thornsley, desperate for answers, calls in her thirteen-year-old neighbors, the Botanic Hill Detectives—twins Lanny and Lexi Wyatt, Moki Kalani, and Rani Kumar. Their exciting mission? To find the urn and its real thief, bring the criminal to justice, and exonerate Dr. Thornsley so his spotless reputation can be restored.

A roomful of venomous snakes, the poisoned Egyptian pond, and Dragon Pit Man are just a few of the tests awaiting the four tech-savvy teenagers. As the detectives begin to unravel the sinister plot, the mystery takes a dangerous turn. Answers are at their fingertips—if they can only convince their parents to let them solve the case.