New York, 1995. Cop Callum Burke arrives in New York from Hong Kong, drafted in as part of an international investigation into organised crime.

With the handover of Hong Kong to China only a couple of years away, gangsters are moving their operations out of the territory and into New York ahead of the looming deadline.

Burke’s experiences with East Asian crime and the Triads’ links to the Irish Mob make him the perfect man to send in undercover.

But as he infiltrates these vast and lethal criminal networks, bodies start to pile up in his wake and his conscience threatens to send him over the edge.

And when Burke’s NYPD handlers push him to continue the investigation at all costs, he may have to cross the line from cop to criminal just to stay alive…

Readers of Don Winslow, Michael Connelly, Steve Cavanagh, Richard Price and John Sandford will love this dark and morally complex novel which presents a searing portrait of mid-1990s New York as you’ve never seen it before.

I’d love to write full-time but, unfortunately, that’s not on the cards for the foreseeable future. With a full-time day job, my little girl, Hana, and wife, Tomoe, and all other family hundreds or thousands of miles away, I write when I can. Lunch breaks, on the train if travelling for work, when I can grab a spare twenty minutes: Guerrilla writing, basically.

Because I have to put my writing cap on when and wherever I have time and space, not really.

Coffee, coffee and more coffee. If I have time at the end of a night, I’ll have a couple of beers and that often stimulates ideas after a day of mulling a book over in my head.

I don’t have one favourite but the book that really grabbed me at an impressionable age, and maybe made me want to write, was The Great Gatsby. I enjoy so many authors’ work, though, for many reasons. I particularly like some of the more extreme authors, those who go to places in the psyche many others wouldn’t: Derek Raymond’s Factory novels are a good example, or the Southern grotesques of Harry Crews’s work. Crews wrote a very powerful essay on this that I’d recommend any writer read, Climbing the Tower.

I had a few short horror stories published in US anthologies when I began writing to be published, so I’d be open to exploring that genre again in the future. I also used to read a lot of comics, and still love a lot of Garth Ennis work, so writing something with a comic-book artist would be great.

Any similarity to persons living or dead is purely coincidental, right? Right?

Honestly, I’ve met a lot of larger than life characters in my time, so if a trait creeps in here and there, it’s perfectly naturally, really; and I did incorporate some of my own experiences of New York in the mid-nineties in my latest novel, Rat Island.

The longer I get into writing a novel, the more I need to have one to hand. I always buy a small moleskin notebook at the start of the research process, a different colour for each book, and go from there. I also have a waterproof Aqua Notes pad in the shower, which is invaluable.

I’m not a huge fan of romance, as it’s just a little too formulaic for me – but I can see why many love it (of course, a romance fan might say the same of a lot of crime fiction, especially procedurals). Some of the humorous stuff can be pretty good fun, though. I can see why Sophie Kinsella is so popular.

Harry Crews, to force me to put some ugly truths out there on the page, with humour and humanity; and Robert Aickman to teach me elegance and cleanliness of prose, and how to create intense atmosphere from the seemingly mundane.

I’m very lucky in that I travelled and lived in Europe, North America and East Asia. I always wanted to go to South America, though, and the culture and people would lend a lot of colour to characterisation. Also, a couple of years ago I had a bit of cash from foreign rights and used it to travel to New York for research for Rat Island. I interviewed former NYPD narcotics cops and would love to do so again – and go on a ‘ride along’.

John Steele was born and raised in Belfast, Northern Ireland. In 1995, at the age of twenty-two he travelled to the United States and has since lived and worked on three continents, including a thirteen-year spell in Japan. Among past jobs he has been a drummer in a rock band, an illustrator, a truck driver and a teacher of English. He now lives in England with his wife and daughter. He began writing short stories, selling them to North American magazines and fiction digests. He has published three previous novels: RAVENHILL, SEVEN SKINS and DRY RIVER, the first of which was longlisted for a CWA Debut Dagger award. John’s books have been described as ‘Remarkable’ by the Sunday Times, ‘Dark and thrilling’ by Claire McGowan, and ‘Spectacular’ by Tony Parsons. The Irish Independent called John ‘a writer of huge promise’ and Gary Donnelly appointed him ‘the undisputed champion of the modern metropolitan thriller’. 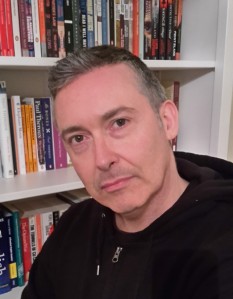