In training for a sleigh race, the cadets must work together to win the ultimate prize—Jingle Bells! But Ronaldo’s dream turns into a nightmare when Cupid joins his side. She’s the worst flying cadet, ever! And his squabbling teammates are plotting to put her out of the race.

But Cupid isn’t who she appears to be. And when Ronaldo discovers she is the granddaughter of a world famous flying champion, he suspects she is guarding a secret. And the only way to lead his team to victory—is to find out what it is. 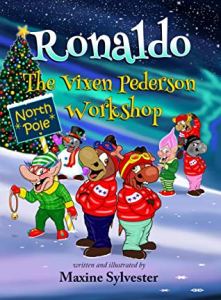 Ronaldo is back! This time he and his friends take us to the North Pole and which flying reindeer does not want to attend a workshop by Santa Claus’ best one?

Winning the prize they get showing they are the best team at the end of the course would be like a dream come true. The tension builds …

A team is only as good as his weakest member and this would mean no first place for Ronaldo and his crew. Can he find out what is holding one of them back? Why is her performance brilliant one moment and sustandard the next? Will he come up with a solution on time?

If you are still looking for a lovely Christmas gift for the young ones, this is certainly a book you should consider. Not only are the pictures cute, but Ronaldo also teaches us in a fun way about friendship, how to respect each other and how to work together as a team. 5 stars.

I was born in Hounslow, Middlesex in the south of England. As a child, I loved drawing and took private art classes with a wonderful teacher called, Pearl Lee. She had an abundance of Disney magazines, and I would paint the characters on wood, card, canvas or anything else I was allowed to use, including walls.

When I was nine, my mum took me on holiday to Majorca. I clearly remember being fascinated by how other people lived outside of England. Travelling became my new obsession.

After Sixth Form College, I intended to go to art school, but my travel bug got the better of me and chose to work as a holiday representative in Greece instead. This was followed by seven years working on cruise ships, two years in Israel and Palestine, and six years in Russia and Armenia. Although I lapped up the different cultures, I found my work over the years very unfulfilling. I decided to dig out my Caran d’Arche pencils, and do something about it!

I enrolled in The College of Cartoon Art and was mentored by the renowned caricaturist, Steve Chadburn. I created a character called Ronaldo and decided to write a short story about him. Before I knew it, my head was spinning with ideas and the first book, The Reindeer Flying Academy, went from a small picture book into a fully blown chapter book … but more importantly, I loved every minute of the writing and illustrating process.

Nowadays, I live in Bali, Indonesia, with my amazing partner, Mark, (Bristol born and bred) and am currently illustrating the third book for the Ronaldo series, Rudi’s Birthday Extravaganza.

I am still a self-confessed Disney geek and get excited as a five-year-old whenever a new Disney animated film comes out. I love the Disney theme parks and have visited Orlando, Paris, Hong Kong and Tokyo – California and Shanghai are next on my bucket list.

I have an unhealthy fondness for pizza and chocolate but a healthy love of Pilates – I like to think they balance each other out.

And finally, I am a lifelong Arsenal supporter … although sometimes I wish I wasn’t!