This debut novel by Tot Taylor explores ‘extreme creativity’ – at the level of ‘genius’ – in this tale of a young singer-songwriter from the 1970s. With a painting by Bob & Roberta Smith adorning its cover, the book’s 900 pages recount a life-story from childhood to . . . oblivion.

John Nightly (b. Cambridge 1948) finds his dimension in the world of pop music – the art form of his time. In previous decades, he might have been a novelist or poet, a painter or a playwright. In previous centuries, a grand chef or gardener, astronomer or plant-hunter, when these occupations were revered as highly as that of ‘Artist’.

We follow his rise and fall, his growing up and development as a musician, the
tragedy of his ambition and his success, followed by his subsequent withdrawal from everyday life. John Nightly’s creative period, his ‘spirit-wind’, lasts a mere five summers.

John Nightly’s ability is spotted early, his LP ‘Ape Box Metal’  becoming the third best-selling record of 1970. But success turns out to have side effects and he disappears into a thirty year void of missed opportunities and unfinished projects.

We meet him as a child prodigy in late 1950s Cambridge, finding fame in the Carnaby Street music scene of the mid-60s then supermaxed at various retreats in Los Angeles during the 70s. John Nightly sleeps through the 1980s until after too many lost years, he moves to his ‘saven-heer’ at Carn Point on the coast of Cornwall.

Premiered in 1970, the ‘Mink Bungalow Requiem’ still holds the all-time record for the most performers on a public stage at any one time. Just before his meltdown, John Nightly toured the world with it backed by two symphony orchestras, a thirty-piece rock band, a dance company, three school choirs and sixteen articulated trucks. Meeting this teenage saviour dude, can the Master be brought back to life again?

A tangled love story, the recording-studio as creative hub, the music industry as dramatic backdrop, astronomical tables, Methodist hymnals and surfer mags as well as some serious gardening notes also play important parts in this one thousand page novel. 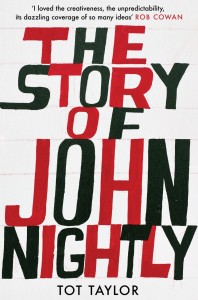 In Cornwall, tin is a dying business.

A century ago there were mines all over the county districts of Penwith and Pendeen. One hundred years earlier, John Wesley preached to vast outdoor congregations all the way from

Quarry Bank to Carn Point. Tinners in Redruth and Morvah hung on his every word. Today, one thousand derelict sites lay abandoned across the rough coastal plains where once there were fifty thousand working pits.

Well, the tin has to come from somewhere now that everything is tinned and canned, doesn’t it? Even laughter. And Tin Pan Alley itself, of course. It’s more hygienic. It’s more… what we come to expect from Now! But these days, all that tin is coming from America. So in Cornwall, and places like that, where the industrialisation of natural resources can no longer support the local community, people are looking for other ways to make a living. And this is where the new pop entrepreneurs come in, where they’re emerging from – the most unlikely trades and industries. In the case of twenty-one-year-old John Pond at JCE, it’s the TUC, the Trades Union Congress. The body that regulates fair wages and fair play for Britain’s long-suffering workforce was the manager’s previous paymaster, his ‘alma mater’, if you like.

When the position of Youth Employment Regulator turned out to be more of a desk job than anything else, the ambitious young graduate stayed for the statutory 12 months only before moving to the much groovier environs of Carnaby Street. Before the TUC, the precocious Pond had been the head of the Student Union at Bristol where he was studying for a degree in mining. And that… little connection… is how he came across John Aldebaran Carter. Mr Tin Mine himself. Mr JCE.

The universities and art schools of Britain are now breeding grounds for Pop, as people have quickly realised that it’s a thriving new business, and that there’s a penny or two in it. Again, it’s the place to be. It’s hard to see how a degree in quantum physics can lead to a dingy back room behind Oxford Circus but that’s how it is nowadays. Identify the zeitgeist and anyone can zoom.

Take Johnny Johnson, manager of the Witchdoctors. He came from Boxing, where he trained three Lonsdale Belt holders before using his contacts in the world of entertainment to secure the Canvey Island rockers slots on

some of the biggest package tours of the day. Then there’s Johnny Storm, who looks after new sensation Polly Pops (they used to be the old rock’n’roll band the Vampires); he still runs a string of hair salons and men’s barber shops across the Midlands, which is where he started off. ‘Stormy’ Storm, so called because of his notorious black moods, was the first person anywhere to coin the phrase Unisex. And that is still his legend.

The fact is that today every opportunity is open. So if you have the will to make it and can get yourself down to London and get operating, well… It’s all there for the taking, isn’t it? The unlikeliest one of all being Johnny ‘Dave’ Davison, currently proprietor of the new underground gossip mag Grass. Dave was originally in politics with the National Teenage Party1, where he campaigned for a lower voting age and protecting the environment. One night on the campaign trail he came across Strawberry Quick in a pub in Mile End – they were called the Periwigs then – and took them to the top of the charts. The Periwigs needed money to record their debut single so Davison contacted old Johnny Carter, who he knew from the tinned-fruit world. And there you have it – Strawberry Quick became the first JCE success! In fact, their single ‘Lovely Louvre’ is about to be featured in the new John Schlesinger film and John Barry told someone he liked them a lot in an interview on the radio the other day.

Cornelia came back out of the manager’s office and looked on the boy with new enthusiasm.

‘John… do you think you could be at GIRL magazine at four this afternoon?’

‘John wants you to see the picture editor there at four. They’re doing a feature on stars who went to college. Graduates…’

Cornelia, suddenly finding the new recruit a deal more attractive personally, struck up a rather awkward model pose herself – a typical knock-kneed Twiggy – as if rehearsing for a potential future scenario. She held her file of Young Possibles away from her blouse, in order to show off her figure while balancing her statuesque, perfectly proportioned frame on her lacquered slingbacks.

‘It’s just amazingly perfect for you, John…’ The girl put a small step forward to prevent herself from toppling over. ‘They’ve got

Jonathan Miller and Jonathan King2… but they want someone new as well. Brand new…’, Cornelia raised her eyebrows provocatively at the awkward youth.

Cornelia leaned back and tapped suggestively on her clip-file, ‘I think you’d enjoy it, John.’

‘But what have you got to lose, darling?’

What the boy was saying sounded conclusive and final, but maybe he was really only waiting for an excuse to change his mind. On the one hand, John Nightly was thinking about the green guitar and the scooter, but he was also curious to discover how these fresh, innocent and most importantly ‘foreign’ model girls might appear in the flesh. The boy continued to playact with the decorative secretary. ‘I don’t even know where…’ But Cornelia had to move on, get on with her arrangement-making. ‘Wardour Street, John. You can walk there in two minutes…’

The boy sighed and played with his scarf. To turn down this out-of-the-blue assignment might discourage the vibey management from proceeding with the real business of the day, securing him that all-important gold-dusted recording contract.

‘… I… uh… it might be alright, I suppose…’ he mumbled to no one in particular as he turned to leave. ‘Long as I can get back on the train to Cambridge…’

Tot Taylor is a writer, composer, art curator and music producer. He has worked in music, film, theatre and the visual arts since being signed by Island Records while still at school. For the past thirteen years, he has been cocurator of the Riflemaker gallery in Beak Street, Soho, which he co-founded with Virginia Damtsa. Their artists have been featured at Tate Modern, MoMA, the Pompidou Center and Frieze Masters, among others.