When five-year-old Ava Sawyer goes missing from a birthday party at a local garden centre, the police are bewildered by the lack of leads. That is until two years later, when Ava’s body is found and another little girl, Audrey Briggs, goes missing. Audrey also attended that party …

Leading the investigation is Detective Natalie Ward . A mother of two teenagers, this case chills her to the bone, and is a disturbing reminder of the last job she worked on. One that ended very badly.

Natalie soon discovers that Ava’s mother has some worrying gaps in her alibi and as she digs deeper, she’s sure Ava’s father is not telling the full story. And what did the owner of the garden centre Elsa see that day? Something that she’s not telling Natalie …

Just as Natalie is facing up to the grim possibility that Ava and Audrey were killed by someone close to home, another little girl from the party doesn’t come home from her ballet lesson. Can Natalie find a way to stop this killer before more innocent lives are taken? 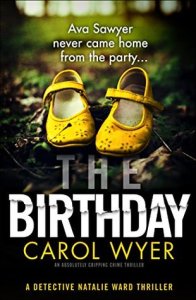 Best not to let your children out of your sight …

My second book by this author and I just love the way she can keep you glued to the pages of her books.

In this story the emotions pile so high you need a ladder to get over them. A murder case is never good but when kids are involved, I even feel more involved and my heartstrings are under an even greater duress.

This story is fast paced and well written and I like the way it is structured. We get a glimpse of the mind of the perpetrator and each girl’s story is revealed as well.

It certainly is not an easy case to solve and the DI and her team feel like they are fighting against a wall.

We also get a bit of inside information in the team’s personal lives, but I am looking forward to really get to know them.

In my opinion this book is the first in another wonderful series. To be continued …

Carol Wyer garnered a loyal following as an author of romantic comedies, and won The People’s Book Prize Award for non-fiction (2015). In 2017 she stepped from comedy to the “dark side” and embarked on a series of thrillers, featuring the popular DI Robyn Carter, which earned her recognition as a crime writer.

The Staffordshire-based writer now has more crime novels in the pipeline, although she can still sometimes be found performing her stand-up comedy routine Laugh While You Still Have Teeth.