Okada Akari and Sakamoto Megumi just may be two women in over their head. Okada Akari is a samurai, the daughter of the Chief Advisor to the Emperor of the Sakamoto clan. One day on a mission, she is captured by a mysterious warrior and taken to an enemy camp—an enemy filled with strange, foreign powers the likes of which her world has never seen. What’s worse, a foreign stranger is supplying her enemy with weapons her people cannot hope to fight against. Yet that is only the beginning of her journey, one filled with war and love, sacrifice, and darkness.

Sakamoto Megumi has wanted to be a samurai her entire life. However, as the daughter of the Emperor, training is impossible. When the Emperor is assassinated, she is thrust onto a throne she never wanted. As Empress, she must find a way to become a leader her people will look up to, instead of a weak woman unfit for the throne. Her generals are waiting for her to make a grave mistake. Falling in love with her high general might very well be the mistake they were waiting for.

Corruption has touched worlds before, but this time, it will take more than a few Chosen to stop it before it fills the hearts of everyone around them – even the hearts of their closest friends and allies. 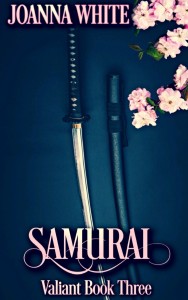 Joanna White is a Christian Author and fangirl. Hunter and Shifter are the first two books in her debut series, called the Valiant Series. In December 2019, one of her short stories was featured in Once Upon A Yuletide, a Christmas fairy tale anthology by Divination Publishing. Dark Magi, a prequel in the Republic Chronicles came out in November 2019. Glimpses of Time and Magic, a historical fantasy anthology, also featured one of her stories.

She graduated from Full Sail University with a BFA in Creative Writing for Entertainment. Ever since she was ten years old, she’s been writing stories and has a deep passion for writing and creating stories, worlds, characters, and plots that readers can immerse themselves in. In 2020, she reached her personal goal of writing a million words in a year. Most of all, Joanna loves God, her family, staying at home, and being a total nerd.

Runs from today until September 10th

win a An 8 x 11 map from the book, 8 x 11 poster of the cover, and early access to Healed (Digital), the short story ending to Samurai