A top-secret experiment at a restricted virtual-reality compound pulls attorney Tommy Diaz back into the orbit of Irene Adler, an old friend with an eidetic memory, a love of true-crime podcasts, and a knack for solving the unsolvable. But this? At a remote warehouse, a VR trial goes awry when a willing test subject, alone in the observation room, drops dead of anaphylaxis—from the sting of a virtual bee. Though the tech titan behind the research believes in the power of the outrageous, Irene relies on clues, hard facts, and a level head. However, in a case this peculiar, how elementary can it be?

We went inside, and into what looked like a clearing in the woods. It took me a moment to realize that the floor, walls and ceiling were all covered in LED panels that were projecting a three-dimensional image. Victor lay in a patch of grass in one corner of the room beside a tree whose branches stretched outward into the simulated sky. A cloud of bees was buzzing around the hive dangling from one of the branches.

“I . . . can’t breathe. Help me,” Victor said without turning to face us. His voice was ragged.

“Where did those bees come from?” The kid with the buzz cut sounded confused. He had a Russian accent, and couldn’t have been more than twenty-five.

“There are more over there,” Tyler said and pointed to the LED panels on the opposite wall.

“Victor must’ve been stung. But how—”

“He’s going into anaphylaxis,” Tyler said. “There’s epinephrine in the first aid kit.” He ran out into the hall to retrieve it, and when he returned, he shouted, “Someone call 911!”

I tried to but the call was rerouted. As an automated voice thanked me for contacting Avisa’s private emergency number, I watched Tyler poke a needle into a vial of epinephrine and draw the clear liquid up into it. He plunged the needle into Victor’s thigh.

A woman with a soothing voice came on the line, and after I explained what was going on, she told me she’d send emergency personnel to Avisa House. The alarm stopped suddenly, and I hung up and glanced over at Irene. She was observing everything, doing her best to commit the moment to memory.

I’d assumed that the shot would’ve immediately revived Victor, like in the movies. Instead, his eyes rolled up into his head and his body went limp.

“He passed out,” Priya said. “Do something, please!”

Tyler started CPR. A blonde woman with a magazine tucked underneath her arm came through the open door. My best guess was that this was the chef, Carol. “What the hell is going on? What was that alarm?”

Victor was still unconscious. He must’ve had a serious allergic reaction—his cheeks had ballooned to grotesque proportions, his eyes were swollen shut, and a bright-red rash had broken out on his neck and chin. Tyler stopped pumping his heart and put two fingers to Victor’s wrist to check his pulse. After a moment, he said, “He’s dead. I’m so sorry.”

Priya dropped to her knees beside him. She started to sob. I was too stunned to say anything. We all were. The room was so quiet that I could hear the distant sound of rain drumming on the roof. A couple of EMTs showed up a few minutes later—looking back, I wonder if they really were EMTs. They had both the air of authority and the equipment of medical professionals, but I can’t say for certain.

“I don’t understand this.” Priya had gotten up and was standing with Irene, Shinwell, and me. Her eyes darted back and forth between Irene’s face and Victor’s body as it was loaded onto a gurney. “He was fine just a few minutes ago.”

“Was he stung by digital bees?” I asked in a low voice.

“I think someone wanted it to look that way,” Irene said. “But I don’t buy it.”

Lauren Wilkinson’s debut novel, American Spy, was a Washington Post bestseller; was nominated for the NAACP Image Award, Anthony Award, and Edgar Award; and was included on Barack Obama’s 2019 Recommended Reading List. Her writing has appeared in New York Magazine and the New York Times, among other publications. 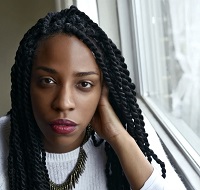