A dramatic, uplifting true story of a teenage girl overcoming great odds to survive. A historical novel that beckons the reader to follow in the footsteps of a real-life individual one step at a time. Based on the true story of the author’s grandmother.

In the autumn of 1940, thirteen-year-old Alexa’s happy life is ripped from her as she, her mother, and many of the locals are rounded up by the Nazis in Poland. Loaded into trucks, they are transported to an unknown destination. Terror and uncertainty become the new normal. Life is a continuous nightmare as she is selected by the Gestapo officer’s wife, destined to become little more than their slave.

Separated from everyone she loves Alexa relies on her Christian faith, inner strength and courage, to endure through her long nightmare. Her story takes her on a treacherous journey across war-ravaged Europe in search of her family and the life she once knew. Despite living through unimaginable hardships and life-threatening danger, Alexa feels that someone or something seems to be looking out for her. Years later, she finds out that not all was as it seemed, as hidden secrets from this dark period in history are revealed to her.

Alexa turned around with a spring in her step and walked back over to face the mirror again, but now the reflection that she saw behind her had changed and had changed for the worst. All traces of her beaming happy smile fell from her face in an instant.

“Mama look! The German soldiers are outside in the street!” Alexa gasped her voice full of panic.

Both Sophia and the shopkeeper immediately turned to look out of the window and to their horror, they saw the terror unfolding before their eyes. The thunderous noise which they had heard, was the sound of large army trucks rolling along the cobbled streets of the town square outside. The heavy vibrations made the shop windows rattle in their wooden frames. Fear filled their hearts and panic engulfed every part of them. Sophia pulled Alexa close to her and took a firm grip of her hand. Sophia asked the shopkeeper if there was a back door leading out of the property. But the woman shook her head, ‘No’. Through the windows they could see that outside was a line of about five or six large grey colored German military trucks parked to one side, along with a dozen or so military armored cars. On the other side of the street, people were being lined up together by Nazi soldiers with brutal force. The local people were being dragged out of the shops at gun point and forced to stand together in the middle of the town square.

Sophia held her daughter’s hand even tighter. “Don’t worry darling, try to stay calm,” said her mother. Not really knowing what to say for the best in the situation into which they had now been thrown.

The door of the shoe shop burst open and the bell above, loudly rang a warning sound.

“Get out! Everybody out! Get out onto the street now! Raus! Schnell!” yelled one of the angry German soldiers pointing his threatening rifle at them. He had another soldier with him, holding

a vicious barking German shepherd on the end of a long chain. Saliva drooling down from its jaws. Sophia moved hurriedly towards the door, grasping hold of Alexa’s hand. There was no time to think, only to do. To do as they were ordered. To go outside with all the others. They spilled out onto the street and lined up with all the other people being forced against their will. The woman from the shoe shop hastily began to protest her innocence aloud, insisting that there had been some kind of mistake.

“Why are we being treated like this? We are not Jews! We are good, honest, hard-working Polish people! There must be some mistake! I have identification papers and I own this shop!” She insisted.

The German SS commander standing closest to the woman and who seemed to be in charge of the operation, let out a loud laugh.

“Good and honest…ha! Now I’ve heard it all,” he laughed sarcastically with his fellow Gestapo officers and soldiers. “Good for nothing more like it and honest liars, she should actually say.” The soldiers all laughed again. “Hard workers, eh? Well let’s hope so for your sakes. I hope you Poles work harder than the lazy Jews do.”

The woman now became hysterical and began begging the commander to let her go. She moved closer towards him in the middle of the street. Her pleas becoming louder and more out of control. Sophia whispered to Alexa to close her eyes, anticipating what would come next. Then quickly the commander reached for his pistol, laughed sarcastically and said to the woman loudly.

“Now you can Go! Go directly to meet your maker.” He took aim at her forehead and in a split second, pulled the trigger. The bullet hit its intended target and the woman became limp, collapsing to the ground in a heap. And just as fast, the life left her body. As her head connected with the cobbles it made a loud cracking noise. Then a slow stream of deep red, began to fill the channels between the stones, her blood staining the mortar.

Rochelle Alexandra was born in Glasgow, Scotland where she grew up, then moved to New York to live when she was eighteen. She had an early love for writing poetry, winning a National Scottish competition and later had a few poems published in the USA. She’s a talented artist and photographer with a real love for children, horse riding and travel. Her favourite jobs were in advertising, working for a newspaper, a photographer’s assistant and private chef. She ran her own freelance art business painting portraits, murals, abstracts and commissions.

She never set out to be a writer, but after hearing her Polish grandmother’s gripping true life history during WWII first hand, she made a promise to her gran that she would write her story in book form. Sadly her grandmother Alexa passed away aged 92, just two months before the novel ‘In Alexa’s Shoes’ about her life was due to be published. Little did Rochelle know that she’d love the writing process so much and now has several future novels planned. 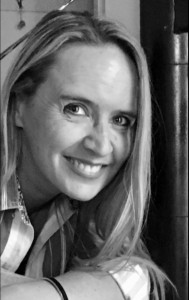