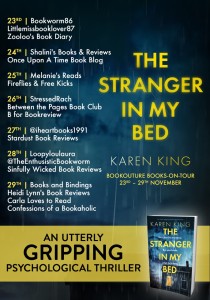 ‘We have a patient who has been involved in a serious accident. We believe he’s your husband.’

When Freya first met Phil, she thought he was the man of her dreams. He bought her roses every week, booked surprise trips to sun-soaked destinations, and showed her affection like she’d never experienced before. But over time the dream has become a violent nightmare. And now Freya is packing her bags, knowing it’s time she escaped their increasingly broken marriage.

But then Freya gets a visit from the police. Phil’s been in a horrific car crash and – as he comes around – it becomes clear that he remembers nothing since their blissful honeymoon two years before, back when their relationship was perfect. All he wants is to be happily married again.

Freya knows giving him another chance could be dangerous. But now he’s the one who needs her, it’s a chance to turn the tables, and to change the outcome of their relationship once and for all. After all, he will only know what she chooses to tell him…

But what really happened during those two years of marriage? And as they start over again, who is safe? And whose life is in danger? 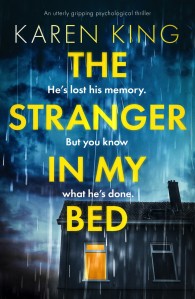 I know the author. Well, not personally of course, but I have read romantic stories written by her. When I saw she has been working on a thriller, I was curious. Curious to get to know her darker side. 😊

I was sooo not disappointed! I really think this is a genre that fits her like a glove too. I was immersed straight away. We can live the story through the eyes of different characters and we also get a glimpse into the perpetrators mind.

Some parts are repetitive, but in my opinion that’s the way the author wants the readers to understand how much doubt there was in some of the key players’ heads. I think I had as many doubts. I honestly did not know who to believe and that’s great in a book. 😊

So, dear author, please don’t hold back and I’ll come back for more for sure. 😉 5 stars.

Thank you, Karen King and Bookouture

Karen King is a multi-published bestselling author of fiction for both adults and children. She has also written several short stories for women’s magazines. Currently published by Bookouture and Headline. Karen has recently signed a two-book deal with Bookouture to write psychological thrillers. The first one will be out in November, and the second one in 2021. She is also contracted to write three romance novels for Headline, which will be out in 2021 and 2022