As a detective in the Metropolitan police, Zac is no stranger to murder cases, but this one is different. This is his daughter’s murder.

Years after Amelia died, Zac is still trying to trace the police office involved in his daughter’s death.

And whilst Zac is prepared to break every rule to find the man responsible, his young and ambitious deputy, Kat, is working on a high profile case of her own. But she knows Zac is keeping secrets from his team so she’s following his every move.

When one of Zac’s informants is killed, he knows he’s close to catching his man, but before he can act, he receives a call about his son which blows his world apart… And this time, he knows he’ll stop at nothing to save his family. 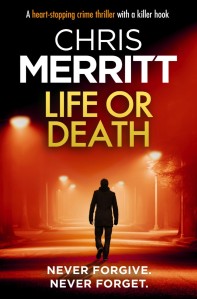 My second book of the series and I was already captivated by the previous story. I could not wait to see what happened next and yes, yesterday was the day I was finally able to snuggle up under a blanket and start reading.

Sometimes my body loses the battle agains sleep but not with this book. There was no stopping me. I was going to finish it no matter what time it was.

And OMG the author certainly knows how to capture a reader’s attention. My brain went in overdrive trying to figure out who was the master mind in this book and in the meantime my heartstrings were doing an up-tempo aerobic workout.

I was very nice meeting up with detective Boateng and his sympathetic crew and I like the fact that he is so very human. He certainly wears his heart on his sleeve.

The only thing I would like to add is grab your copy, because you will not be disappointed. 5 stars.

Chris Merritt is a Clinical Psychologist and former diplomat based in London, who has been writing on psychology since 2010. In 2014 he decided to combine his Bring Her Back, his debut novel. He currently works on a mental health research project at King’s College London, and part-time as a psychologist in the NHS. When not working or writing, he loves climbing and basketball, and dreams of one day being able to work from home enough to own a whippet.