A scary adventure for 8 -12 year olds, full of jokes, magical familiars and a Dickensian cast. When Septimus inherits a magical, treasure-finding Hairy Hand from his uncle, life suddenly becomes a lot more exciting – and dangerous! 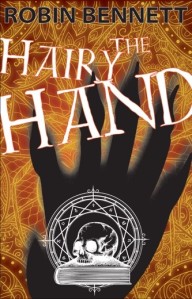 I think we’ve arrived at a golden age of book covers and all things book design. I say this because I have a new problem when I go to bookshops now … before I used to get lost in my reading, lose track of time and get in trouble for being late. I even managed to miss a flight once at Charles de Gaulle airport in Paris. Like all book lovers, I know that bookshops are not shops at all but portals. They are gateways to a several world: true tales, tall stories and raw talent.

With strict instructions to be out within forty minutes, these days, I hardly get any time to read at all. And this is because I dawdle over the covers, distracted by artwork that draws the eye and makes you pause before you’ve read a word. I want to own almost every new book I see these days – even the ones about knitting – and so I keep picking books up and putting them down and moving on.

Relevance can be a problem, to be blunt. When I eventually do settle, I find myself wondering why they went for a cover that seems to be nothing to do with the book. This is confusing but it’s a problem I was faced with regarding my latest book, The Hairy Hand (out at the start of 2019, buy it immediately … for it will change your life).

The Hairy Hand is a middle grade novel, with magic, macabre familiars and a Dickensian cast. ‘Fine,’ said the designer, Nick, a chap I’ve known for years, who looks like a pirate, ‘so it’s obviously got a gothic thing going on – a bit like something by Lemony Snicket or Mrs Peregrine’s Home for Peculiar Children?’

Except it’s not quite that, I think – it’s also an adventure story: you could say that, at its heart, it’s a journey for young Sept, the protagonist. It’s also got jokes – quite a lot, in fact.

‘Well,’ I replied eventually, ‘… we were after something gothic, and perhaps a bit scary, but also racy and uplifting and definitely hilarious.’

The knuckles on Nick’s hand holding the mouse went white. ‘I hate working for you,’ he muttered.

So, in the end we went for gothic but it could have gone either way and, some of the other covers, whilst not as aesthetically pleasing, I rather liked. What I will do then, is make sure that some of the ‘prototypes’ feature on the website http://www.monsterbooks.co.uk. It would be fascinating to get people’s feedback.

One element of the cover I am very happy with, though, is the spine. Books spend most of their lives showing only a very small portion of themselves. The spine seems to be somewhat neglected.

This got me thinking.

What we came up with was a patented tag on the spine. I love it – for me it says ‘ take hold of me betwixt finger and thumb, and draw me out’. Like drawing out a good story, it gives a sense of occasion to that great moment for an avid reader: the frisson you get when you hold a new book in your hand and turn the page …

Thank you, Robin Bennett and RachelsRandomResources.

Robin Bennett is an author and entrepreneur who has written several books for children, adults, and everything in between. Listed in the Who’s Who of British Business Excellence at 29, his 2016 documentary “Fantastic Britain”, about the British obsession with fantasy and folklore, won best foreign feature at the Hollywood International Independent Documentary Awards, and his first book for young adults, Picus the Thief, won the Writer’s News Indie Published Book of the Year Award in 2012.