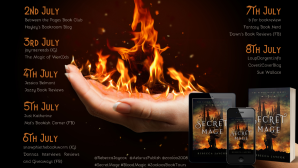 Some secrets are too deadly to keep, some bloodlines too powerful to contain …

Reggie Lang might only be seventeen, but she’s had to grow up fast. Losing a father as a baby made things hard enough, but when her mom turned to alcohol for refuge, Reggie had to hold things together. She still does. If only she could escape it all …

When the other kids at school start calling her a freak, things only get tougher. What’s worse, she worries they’re right. Reggie shouldn’t be able to bring dead creatures back to life but somehow she can? If it wasn’t for her ride-or-die best friend, she’d have completely lost it by now.

When a mysterious man invades Reggie’s dreams, is it just another sign that she’s falling apart? He claims he’s her guardian – that he’s from another world. He tells her that her father’s killer is there …

… and that now an evil mage is gunning for her, destroying anything in his way.

Reggie’s always wanted to escape her life, but not like this. Does she really have to run to protect the people she loves? Who will take care of her mom? The man in her dreams says he’ll teach her about magic and protect her. That he’ll send someone he trusts to collect her. That her blood makes her powerful. It’s a hard choice, but ultimately protecting her mom is worth anything.

The magic-saturated world she discovers might be full of wonders, but the horrors are worse than she could have imagined. Can the man sent to guide her really protect her, or is the sign of his slavery an omen of what will happen to her?

Reggie will be pushed to her limits as she attempts her treacherous journey, struggling to adapt to a strange new world and learning to wield her powers. The Dark Mage isn’t easily evaded. He rules this world with a bloody fist. Because it’s blood he’s after—Reggie’s blood. And avoiding capture might just be the toughest thing Reggie has ever faced.

I write when I get a chance, no preference, although I do tend to be more productive at night lately. That’s because I have a new baby, and I have to sneak in time when he goes to sleep!

Do you need peace and quiet when you are wrting?

Nope, I prefer background noise. I like having Netflix on, with Schitt’s Creek playing in the background, lol. Ewww David!

I am co-writing a series right now with my cover designer, Molly Phipps. We share a brain and it’s awesome.

Let me be the villain. I’ll have a lot more fun, LOL.

I’d like to interview Holly Black because I LOVE her books. I’ve met her before, and she’s lovely.

Where can I find you wen you are not writing/reading?

Before Covid and the baby, I travelled a lot. You’d find me on a Greek island all summer. Unfortunately now, I’m home bound.

Ohhh it’s so pretty, and I hope someone reads it.

I brainstorm with my publisher for titles.

I work closely with my designer giving her examples of what I want, but ultimately my publisher has the final say..

Rebecca Jaycox grew up in the tiny town of Berryman, which borders the Mark Twain National Forest and the Courtois River about 70 miles south of St. Louis. The beautiful landscape fed her imagination, and she began writing stories at age 10 and never stopped. Always seeking adventure, Rebecca moved to France after she graduated college with a journalism degree to teach English at a French high school. Bitten by the travel bug, she has recently visited Italy, Greece, Austria, Spain, and finally made it to her bucket-list destination of Istanbul last summer. Rebecca now lives in New York City with her husband, Gregory. She enjoys reading and writing fantasy, urban fantasy, steampunk, and science fiction. 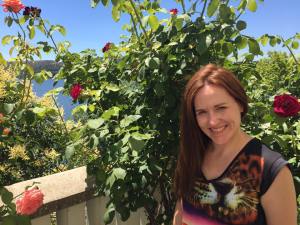