A girl with wide brown eyes looks into the camera. Below her picture, a clock ticks down. Cold traces the back of my neck, pricks my hairline. I will find you, I whisper.

It has been ten years since Winter – a headstrong loner with a broken past – was pulled off a mountain by special forces with the aim of turning her into the Secret Service’s most effective field agent. Now, she has just two weeks to bring down the head of a formidable criminal organisation, Alek Konstantin, before an innocent girl is murdered by a twisted killer in front of an online audience of millions.

Going deep undercover disguised as a paid assassin – alias Snow White – Winter’s aim is to infiltrate Konstantin’s inner circle. Calculating, charismatic and totally in control, he holds the girl’s fate in his hands. But every time Winter gets close to him, he melts away. He’s like a shadow, and yet he knows things about Winter – dark secrets she’s never told anyone. Who is he, and how can she reach him in time to save the girl?

Then Winter finds the body of a man from her past, stuffed in a dumpster with a bullet through his forehead, and things begin to fall into place. But with the girl’s death growing closer with every tick of the clock, and Winter’s protective shell starting to crack, does she have what it takes to bring down Konstantin before the clock hits zero? 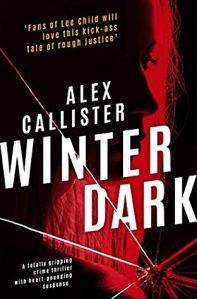 This is a story with a big fat capitle S!

Normally I don’t mind finishing a book and starting a new one straight away, but this one keeps sitting in the middle of my mind. It feels like it’s guarding the gate to my brain and not letting a new story in.

Winter is cold. Not only the season, but the main character is like this as well. She is though, fearless, cold blooded and fights for what she believes in. But even in winter you can have warm, sunny days and this is also part of the protagonist’s life. She can be vulnerable, loving and soft and hot blooded.

This book took me for a ride on a rollercoaster. It contains raw emotions that brought me to tears, others that made my stomach go a bit strange and together they built the most powerful book I have read in a long time. Powerful because of the actions as well as the emotions they provoked.

The author uses short sentences when the action takes place and uses longer ones when the pace is calmer.

This book definitely gets a place in my top for 2020.

If this is what Winter is like, I don’t the other seasons anymore. 5 stars, of course.

Thank you, Alex Callister and Bookouture

Alex read history at Oxford and the British School at Rome and was set for a career in academia until the beginning of the tech boom woke a life long interest in the internet. She has spent twenty years in the City studying the rise of technology and its transformative effect on industry. She describes the ‘internet of things’ as the internet of increased attack surfaces.

Winter Dark is dominated by Firestorm, eBay for the contract kill market. As an analyst in the telecoms and electronics sector at the height of the dotcom boom, Alex watched the internet sweep away barriers, break down borders, transform every industry. Ever since, she has been fascinated by its potential to facilitate crime – a potential that, to date, has yet to be fully realised. She spends her days visiting London’s high security hosting sites and speculating about what might be.