In a distant galaxy, Bethany Kane has cheated death. Now, she has to fight for life.

In an escape pod launched from a great starship, 15-year-old ChapterSister Bethany Aurelia Kane, believer in the Great Power, makes landfall on a windswept world known as The Edge – a planet light years from civilisation.

Battered and shaken, Beth soon finds she is not alone. The Edge is a penal colony where, under the leadership of Zachary Tal, fifty juvenile criminals and reprobates have pulled together a kind of society. They are living and working together in Town, a converted scientific base in the shadow of their crashed spaceship. They have crops, fresh water and electrical power – and are assisted by a contingent of mechanised Drones.

Storms, power failure, illness and death are just a few of the challenges the teenage exiles battle. As Beth accustoms herself to her new life on The Edge, she has to overcome her fears, learn new skills and earn the respect of leader Zach, the arrogant Colm, the resentful Mia and the others. But when a terrible, violent event shatters the colony’s existence, it seems nothing will ever be the same. Who among them is a killer? And just how isolated are they really?…

As the clock ticks towards a final revelation, Beth needs all her new skills and resourcefulness to stop The Edge from plunging into anarchy. And she has her own secret too – one which will prove decisive in the battle for survival…

As a creature of habit, I need to write at the fixed point of my desk in my attic office! It has a lovely view out over our local valley. This is accessed by a very quirky ‘paddle staircase’ which makes people gulp when they first see it, but which is actually really easy to go up and down once you’ve done it several times a day for 18 years! I would actually find it impossible to write on public transport with lots of people around, and even a table in a café would be hard – but I respect people who can do that.

Yes, or classical/movie music. Pop music doesn’t work, and talk radio definitely doesn’t! The soundtracks to the films Oblivion, Interstellar and Passengers were a great help in writing Exiles.

I would be the world’s worst co-writer, as I am something of a control freak with my writing. Seriously, I could not co-write with anyone!

Oh, a villain every time. They are always the most interesting characters.

The singer-songwriter Kate Bush. She is so reserved and private about her work that it would seem a real privilege and an honour to ask her some questions. Some people refer to her as ‘reclusive’ but I don’t think that is true at all – she is just private and not a ‘celebrity’.

Usually on the bed! I don’t have a chair that works for reading.

Out walking in the Peak District, doing events in schools (over 400 to date), visiting friends…

I am always slightly amazed that it’s actually happened again. It’s always somewhat thrilling to see your writing as an ‘artefact’!

They tend either to come straight away or take ages. I look for something allusive, not too ‘on the nose’. I was very pleased to have come up with the title for my last Doctor Who book, Autonomy, as it is a word which hasn’t yet been used in Doctor Who and which refers to the enemies in that story, the Autons, but also something thematic within the plot. With my first children’s book Shadow Runners, that was a great suggestion by my editors which I went with – I called it something else while writing it. Many of my other fiction titles – The Cut, Losing Faith, This Is The Day – just came to me as the right one immediately. Exiles always felt like the right title too – it was never anything else. And surprisingly few other books have ever been called anything similar!

That’s something I am ultimately happy to leave to the publisher, although I always appreciate it if I am asked for ideas. Most writers have strong ideas about what they’d like to see on their covers, but these are not necessarily always good ideas! Writers are not all natural promoters and marketers and sometimes our ideas of what would work well as a cover are way off-beam, or too clichéd or five years out of date.

Daniel Blythe was born in Maidstone and attended Maidstone Grammar School and St John’s College, Oxford, then Christ Church University, Canterbury. As well as being a writer he has worked as a tour guide, a languages tutor, a translator, a Lifelong Learning development worker and a tutor of Creative Writing.

He is the author of several novels for children and adults, as well as a writer of non-fiction on subjects as diverse as popular music, politics, collecting gadgets and games, parenting and the history of robotics. He has written several of the official Doctor Who books licensed by the BBC, including Autonomy. Daniel’s first book with a teenage narrator was The Cut, which was followed by further novels Losing Faith and This is the Day. In 2012 his first supernatural fantasy novel for young readers, Shadow Runners, was published. Emerald Greene and the Witch Stones (for age 9-12) was published in 2015 and a sequel Emerald Greene: Instruments of Darkness in 2017. He has written shorter ‘reluctant reader’ books called New Dawn, I Spy (nominated for the Leicester Reading Rampage Award 2018), Fascination, Kill Order, Hope and Truth and Kiss the Sky.

Daniel has worked as a visiting author in over 400 schools, and has taught on the MA in Creative Writing at Sheffield Hallam University. He now mentors, advises and edits writers of all ages through Cornerstones UK and the Faber Academy and is a regular judge on the Novel Slam for the ‘Off The Shelf’ festival. Daniel lives in the Peak District, with his wife and their two student children. 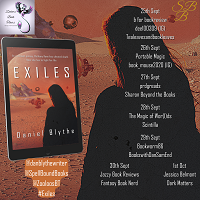